Since Rally has released his historic WAR values for the Retrosheet period (pitcher data from 1953 to current and hitter data from1955 to current) there has been many comparisons of players. The comparisons have been limited to only players that started their career after 1953/1955 due to incomplete data. I wanted to somewhat fill that void.

I took some batters and pitchers from Fangraphs and plotted there WAR vs Win Shares to get a regression equation to best estimate WAR when Win Shares is know. For Win Shares, I used this dataset provided by The Hardball Times. The system is not perfect by any means, but it will allow some comparisons of pre and post Retrosheet players. The following are the requirements and equations:

First, here a comparison of Bond's predicted vs actual WAR. His totals add up 174 WAR actual and 167 predicted WAR. 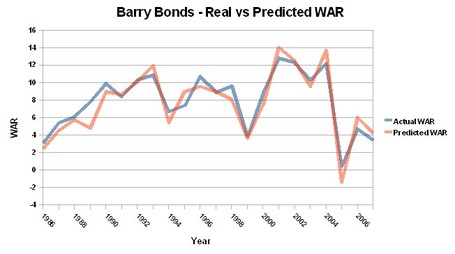 Here is an example of what they can be used for as in filing in the gaps in Bob Lemon's career for the time before 1954. 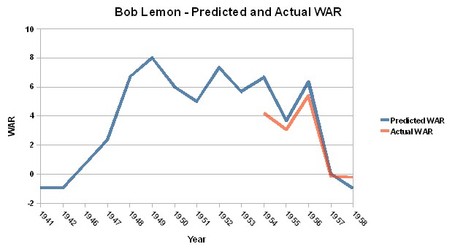 As always I am open to suggestions and comments.