Graph of the Day: 1986 AL Rookie of the Year Candidates

Share All sharing options for: Graph of the Day: 1986 AL Rookie of the Year Candidates

In 1986, six players got votes for ROY in the AL.  Jose Canseco won the voting and probably had the best career of all six players.   It seems that a couple of these player were able to ride out their reputation and play past their prime.  Cory Snyder had 3 seasons of positive WAR, but was able to player for 10 seasons, while Ruben Sierra had 10 seasons of positive WAR while playing 25 seasons. 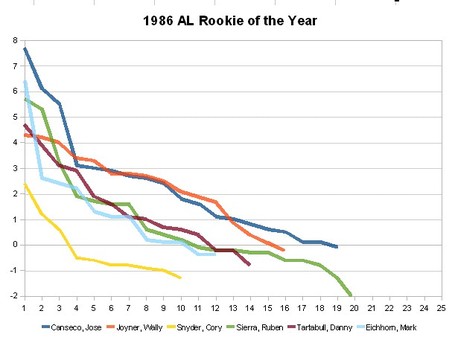