Share All sharing options for: Graph of the Day: Comparing Power Rankings 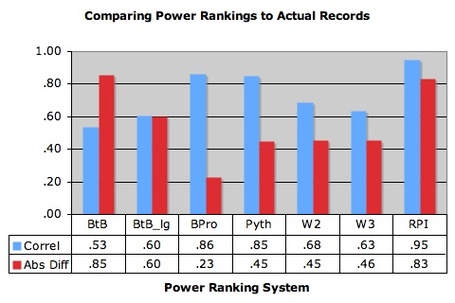 Power Rankings are funny.  They all try to measure something different and cater to a different audience.  And no matter the system, fans of some team will disagree vehemently.  Nonetheless, i was curious to see how Justin's BtB rankings compared to other systems.

All systems are compared to actual records as of late last week using both correlation and total absolute error.  Now, "error" isn't a bad thing here, because these power rankings aren't trying to predict past record, they're trying to extract true talent and ignore fluke.

In general, as correlation goes up, aboslute error should go down.  One system where that doesn't happen is RPI, which correlates the closest to actual record, but has a much tighter set of ratings, making its absolute error quite high.  The system that matched actual records the least was BtB's, followed by the non-league-adjusted BtB number and the two most adjusted BPro systems.  Personally, I'd like to see a power ranking NOT match actual record that closely, because I want new information.  Of course, not matching closely doesn't mean the system is any good.

Anyway, my major takeaways from this graph are that BtB's system definitely doesn't just match win-loss record (as many commenters have creatively pointed out) and that RPI and BPro's systems DO.