Share All sharing options for: New Arms of the Week: June 15-21

First, some "clippings" from around the web. PITCHf/x data after the jump.

Tiger Tales: A Detroit Tigers Blog: Who is Alfredo Figaro?
Lee Panas quickly provides some context around Figaro, from being released by the Dodgers after just one year and his place in the prospect pecking order in Detroit.

Tigers win third straight in Alfredo Figaro's debut - The Morning Sun Sports: Serving Clare, Gratiot and Isabella counties
Figaro's debut as a Tiger came Saturday, and the 24-year old gives the Tigers what may be another impressive young arm.

Batter's Box Interactive Magazine - An Interview with A Civil Engineer (Brad Mills)
Mills wasn't drafted out of high school, or even recruited. So he went to Arizona for his education, and stuck it out despite being drafted a first time.

Barajas torments former club in ninth | bluejays.com: News
As the Jays shed pitchers, Brad Mills was called up to start against the Phillies. He didn't get out of the fourth inning, but still burned up 94 pitches.

Poised O'Sullivan earns win in debut | MLB.com: News
At just 21, O'Sullivan debuted in interleague play. He earned the win in AT&T park, allowing the Giants just a single run on five hits and a walk.

BaseballAmerica.com: Draft: Angels Sign O'Sullivan
O'Sullivan took nearly year to sign after being drafted in the 3rd round in 2005.

Figaro throws heat, and not much else (in his debut)

Combined, Figaro threw 96 pitches, including 57 fastballs and 33 sliders. He tossed in just two change-ups and four sinkers. He seems to vary his release point by pitch, but keep in mind, he only threw a half-dozen change-ups and sinkers combined. 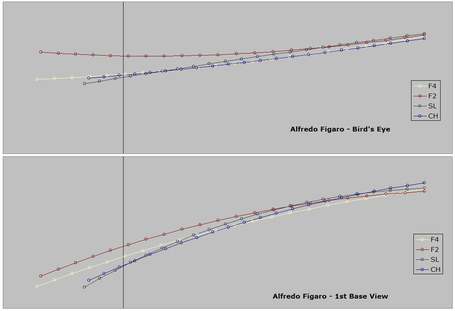 Mills didn't last too long, and threw what amounted to a near even mix of three pitches

The latest member of the Junior Moyer Club used his change 32 times, his curve 24 and a total of 38 fastballs. He throws right over the top, and shows almost no lateral movement on his pitches. 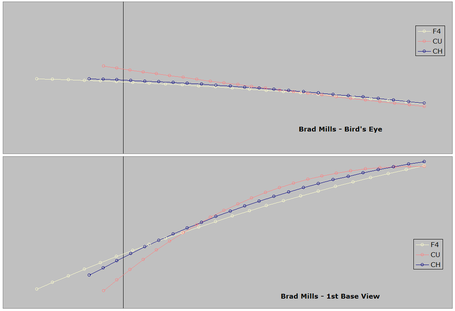 O'Sullivan had a good outing, making this group two-for-three in that department. O'Sullivan also appeared in an exhibition game, so we have some extra PITCHf/x data

O'Sullivan has a very slow change-up. The curve is slurvey, could be/should be re-labeled at some point. 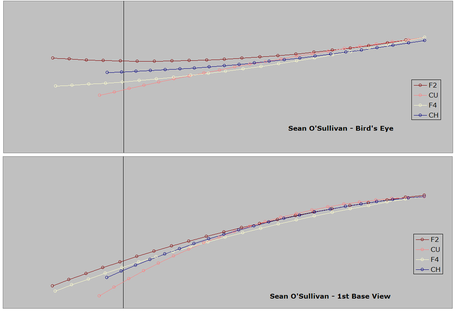