Share All sharing options for: Lucky Home Runs Through The First Two Months

The home run is perhaps the most exciting event in baseball.  Frank "Home Run" Baker received his nickname after leading the AL in home runs with 11.  Babe Ruth's and Hank Aaron's legacies will survive as long as baseball.  Roger Maris' chase for 61 captured the nation, and the battle between McGwire and Sosa in 1998 arguably saved baseball.

Naturally, as a baseball fan, the home run is also a major point of interest for me.  As such, HitTracker Online, a website which tracks a multitude of data about home runs, tends to capture my interest for long periods of time.  One thing that especially catches my eye is the "#Parks" statistic for each home run tracked.  This number is the number of parks the home run in question would've been hit out of under standard conditions (taking out wind impact, temperature impact, and altitude impact).  Many home runs are out in all 30 parks.  Some are out in 27 or 28, but miss in places like Petco Park or center field at Minute Maid Park.  Others are lucky home runs, and are only out in a few parks.  The luckiest home runs would not be out anywhere in the whole major leagues.  Through the end of May, ML pitchers had the misfortune to give up 19 home runs that would not have been home runs in any park in the league under standard conditions.

Here, I've plotted the standard distances of these 19 home runs. 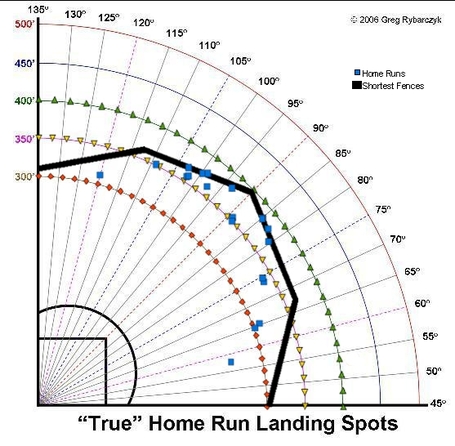 And now, in tabular form.  The table is sorted by horizontal angle.  The top of the list starts with home runs at the right field corner, and the table ends with those closest to the left field corner.   For the definition of HR types, check out HitTracker's Glossary.

The last thing any Red Sox fan needed to see was David Ortiz on this list.  His only home run this year was boosted 16 feet by favorable wind, and would not have been out anywhere without that wind helping.

The short one in shallow right field (Howie Kendrick off Gil Meche @ LAA) is not a data error, it was an inside the park home run.  As such, the "averages" row does not include it.  Unsurprisingly, the biggest factor in these lucky shots is wind.  None of these homers occurred in indoor stadiums, and the average impact of wind was 24.17 feet, almost 1/15 of the average distance of the home runs.

Some other observations can be made by looking at the averages from HitTracker. The average apex of a home run is within 83-87 feet, whereas the average apex of the home runs in question is a whopping 108 feet, which surely assisted the wind in carrying the balls out of the stadium.   Also, the average speed off bat is roughly 8 MPH slower than the league average home run.  These are, essentially, lazy fly balls which just keep floating and never come down.

It doesn't appear that the specific stadium makes a difference, as long as the stadium is an open-air stadium.  New Yankee Stadium, for example, has been talked about quite a bit regarding the effect of wind on home runs.  That may be a basis for a later study, but regarding these 19 home runs, New Yankee Stadium does not appear to have any sort of special impact that we don't see anywhere else.  This table shows the parks in which these home runs were hit.

It will be interesting to see how these statistics change as the year goes on and conditions change along with the seasons.  I plan on revisiting this as the season goes on.