Stephen Strasburg and those other guys

Share All sharing options for: Stephen Strasburg and those other guys 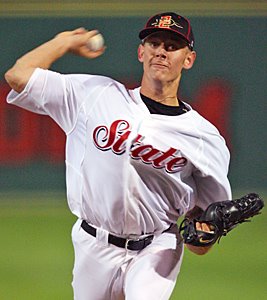 We've had some fun looking back at past drafts and their historical implications, now let's look at this upcoming draft class, starting with college pitchers. There's this guy named Stephen Strasburg that I hear is pretty good, and there will probably be a few other college pitchers to get drafted as well. Let's talk about it after the jump.

You thought I was going to throw out a bunch of scouting reports at you, didn't you? We'll get into some of that. This is Baseball America's top 20 college pitchers, and also some other dudes thrown in there for good measure. The players in the top 20 are expected to go anywhere from the top ten of the first round to somewhere in the 2nd round or perhaps even a bit further down.

The pitchers' FIP numbers have been adjusted for park and strength of schedule.  I'm not here to tell you what sort of predictive quality these numbers have because I don't know, but they are fun to look at. If the FIP+ numbers look absurd, it's because the collective talent of NCAA pitchers is what it is, and aluminum bats probably don't make things easier. We do know that some teams draft more on future potential while others tend to feel a little safer with a player with some track record. Here's a little introduction to some of these pitchers...

I have no idea what he throws, but I'd draft him.

Hopefully this gives you a clue on a few pitchers whose names you'll see being called on draft day. It's a pretty good year for lefties, who I noted were more productive picks than other pitchers, or at least in the 90's. College hitters were the safest of the picks, and we'll look at them next. Sneak preview: To say it's a down year for college hitters would be an understatement.