The Nichols Law of catcher defense states the inverse relationship that exists between offensive abilities and perceived defensive performance. Take Paul Bako. More than 2,300 plate appearances with an OPS in the .620s. He is not, nor has he ever, been a good offensive player. Bako's longevity reigns from, uh, well...Greg Maddux.  After Eddie Perez, Maddux's personal catcher, went down in 2000, the Braves acquired Bako from Florida. Maddux absolutely loved Bako, probably because Bako was the bottom in the relationship and easily manipulated to calling whatever it is Maddux wanted to throw.

So after a season and a half as Maddux's personal caddy, Milwaukee scooped Bako up and gave him nearly 260 plate appearances. The Brewers saw their pitching staff benefit greatly from Bako's game calling and presence. They improved their FIP from 4.9 to 4.86. Woo. If every 10 runs is worth 4.5 million, and Bako was worth 0.04 runs per nine, well, you get the point. Bako wasn't very valuable, but teams kept giving him shots.

Fans seem to fall in with reserve catchers. I don't know why. I suspect it has to do with the mystique of being a defensive stalwart, one immeasurable by metrics known to man. Perhaps having to sit in the bullpen and warm pitchers up is something worthwhile.  These guys are usually horrible hitters, the worst bats on the team that actually get paid to hit. Why? Because if they hit well, they would be playing.

So, you have a player on each team who has writers, fans, and television folk talking up his game calling abilities and whatnot because saying that his entire value comes from squatting for four hours a week isn't something you take pride in.  Eventually it melts in. People start looking for things that feed this confirmation bias of Johnny McBackstop being a human computer. It becomes mainstay knowledge, and now every team in the league needs one of these veteran catchers, good at absolutely nothing outside of history lessons.

People have tried measuring the defensive contributions of catchers and it usually goes nowhere. The most common being Catcher's ERA. Perhaps even more flawed than pitcher ERA. Consider all of the variables thrown in:

You get the point, but let's take it a step further. Jason Varitek is the role model for catcher's defense. Creating a list of compliments and flattering comparisons for Varitek's apparent savvy would take a while. Michael Barrett has almost never been praised for his defensive ability. He's been known to get into fights with his pitchers, so un-Varitek-like, he's never lead his team to the title, and he's not wired like a computer.

Using both of their top 10 catching time seasons, we get these CERA: 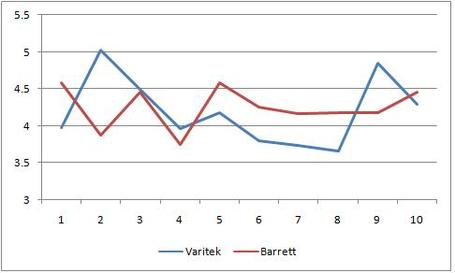 The averages over these 10 seasons are pretty minimal in difference, same with career averages. This is ignoring that Barrett played on worst teams and that Varitek caught in Fenway, and so on. These results would make Tim McCarver go into convulsions. There's not a member of the BBWAA who would accept the idea that Michael Barrett and Jason Varitek handle pitchers on a similar level. That's good, because sometimes it takes an extreme case to get a point across.

Don't use Catcher's ERA. It's useless. We know this from studies in the past, not just from anecdotal comparisons.