Graph of the Day: Babe Ruth vs Barry Bonds

Share All sharing options for: Graph of the Day: Babe Ruth vs Barry Bonds

I have been doing some work on converting Win Shares to WAR (work to some soon) and was having problems at the extreme values which mainly belong to Barry Bonds and Babe Ruth.  Since I had only Win Shares for the two, I did a Win Share comparison instead of a WAR comparison,  Their output is similar, but Barry had a longer career and the Babe's 5 to 7 highest seasons were a little better. 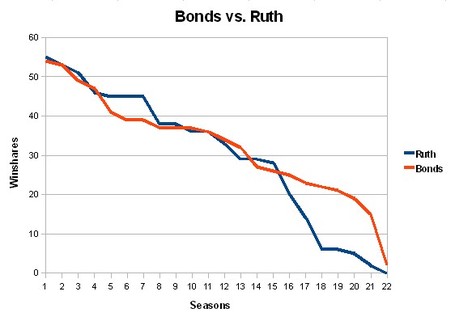