A Check On Johan Santana's Velocity

Share All sharing options for: A Check On Johan Santana's Velocity

After the worst statistical start of his career there was mass-hysteria throughout the greater New York area regarding Johan Santana. SI Writer Jon Heyman was so freaked out that he tweeted this today.

I was so concerned about johan i checked on him. but a mets bigwig (really big) says he's "not at all" worried

Santana gave up nine earned runs on nine hits and two walks in just three innings. The biggest concern was his velocity or lack there of. According to pitch F/X, Santana sat around 90 mph on the day with a max of 92 mph. Now that certainly isn't the same Johan from 2006, who averaged 93 mph on his heater, but Santana's velocity has gradually gone down each of the past three seasons.

As you can see Santana's heater has progressively decreased in speed. We are not dealing with a velocity drop situation like the other Johan (Ervin) Santana, who has lost nearly four full miles on his fastball year over year. Like the fastball, Johan's slider has also decreased in velocity, but he maintains about the same velocity separation on the two pitches. Oddly enough, his change up is actually up a full tick in 2009. If you look at his velocity charts you'll notice that there have been peaks and valleys throughout the past two plus years. 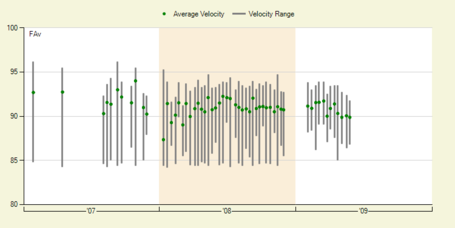 Even though Santana's heater is 2.2 miles slower than it was in 2006, it is actually been more effective. In 2006 his fastball was 2.1 runs above average. This year it is at 3.1. As I mentioned above Santana's change up is actually up in velocity, but year over year it is down in effectiveness. A good change up for Santana would go a long way in helping his fastball regardless of the velocity loss. We've see this time an time again with former hard throwers who have had success even after their fastball has lost some fuel.

After the game Santana said he's been battling non specific "soreness" and a Mets official said he was recovering from a blister, which may have altered the grip on his fastball. There are also some rumblings that his surgically repaired knee could be giving him problems. If he is dealing with multiple injuries, it could easily be affecting his velocity and his effectiveness, but Santana maintains its more of a rough patch than anything physical. Until we have proof otherwise we have to take what he says at face value. The Mets will play my Rays on Fox this Saturday and while I enjoy Santana as a fan of baseball, I wouldn't mind if he had one more bad start before going back to his dominating ways.