Share All sharing options for: New Arm of the Week: Aaron Poreda

Just one rookie debuted this week, and it was 2007 first rounder Aaron Poreda of the Chicago White Sox. When Poreda was drafted, the Sox were excited about his sinker.

"One of the things we were emphasizing for this particular ballpark, which is pretty much of a home run hitters ballpark, is someone who can sink the ball and put the ball on the ground," said Duane Shaffer, the White Sox senior director of amateur scouting...."This guy had the best sinker we saw all year from a college left-hander".

Even the picture in the mlb.com article shows him gripping a sinker.  However, the White Sox are known for their focus on teaching the cutter, and it turns out Poreda, before even being drafted, was working on a cutter.

A slider and changeup complete his repertoire, although Poreda added that he has been working on a cutter.

In Poreda's debut he featured a cutting fastball and his slider. He only threw once change-up, and I say "cutting fastball" since it is difficult, with the limited PITCHf/x data from 1 2/3 innings, to find a clean split between a cutter and a fastball. It may also be a young pitcher find the feel, but it isn't unusual for pitchers (usually starters) to have a blur/continuum of stuff.

The first look is the basic spin movement graph. From the catcher's view, it shows how much the ball's path deviated from the path of a spin-less pitch. It's measured in inches, and negative numbers on the y-axis (pfx_z) indicate more sink than predicted by gravity (i.e. top-spin). 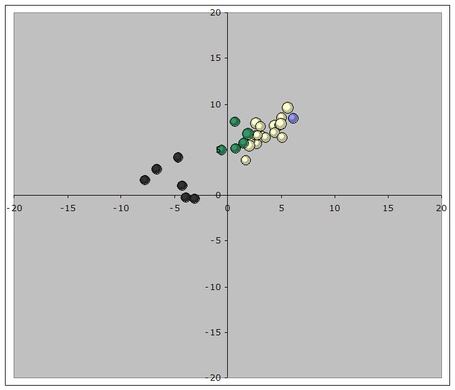 Now, you're probably wondering how I split those cutters from the fastballs: spin axis. This graph uses the pitch speed on the y-axis, and the spin axis or angle or theta (adjusted for arm angle) is on the x-axis. To set the size of the bubble, I use the spin rate (the chart above uses pitch speed for bubble size). 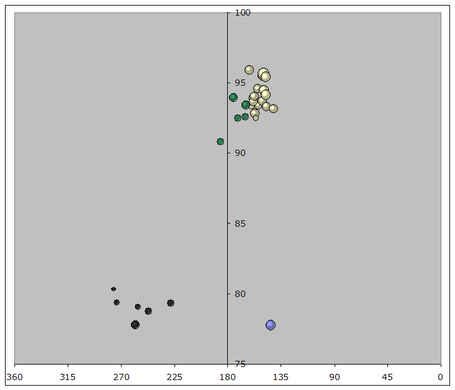 I'm using my own convention to isolate the cutters, but, in this case, one could easily argue the cutter was thrown once, and his fastball naturally cuts a bit, too. I wouldn't argue against that, I've picked my way to skin the cat, and I'm my read on Poreda will change, anyway, after his next outing.

As you can see from the second graph, Poreda throws hard. If you sit down and watch his work from Milwaukee, you'll see the ball seems to "cut" more when he works down in the zone. Yes, even after watching most of his six batters faced, I still am unsure about his pitch type. Gameday punts and uses the generic fastball label, along with the slider and change.

Oh so subject to change ... from just 29 pitches thrown by Aaron Poreda

As you can see, he got his work done, this time, by pitching to contact.