Graph of the Day: The 2008 Rangers Infield

Share All sharing options for: Graph of the Day: The 2008 Rangers Infield

Last week I showed you the outfield for the 2008 Texas Rangers.  This week we take a look at the infielders for last year's team.

As always, I'm using David Pinto's defensive charts based on his Probabilistic Model of Range (PMR) and the image is courtesy of Google Earth.

Additional comments after the jump... 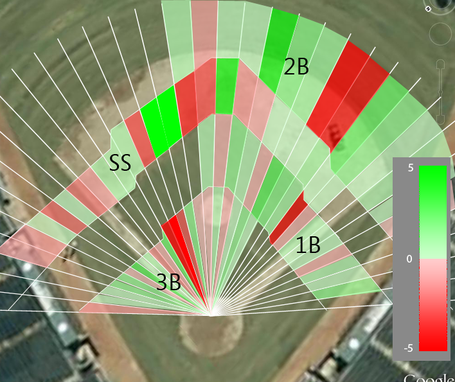 As you can see, there's a lot of overlap between fielders in the infield - largely due to infield flies.  Although many fielding systems (UZR for example) choose to remove infield popups from the ratings, PMR keeps them.

This can affect the ratings for some of the players.

The popups are also the cause of what looks like tremendous range for the fielders.  The SS range reaches from the stands down the third base line all the way to the first base zone.

It looks like moving Michael Young to 3B and bringing up Elvis Andrus has improved two positions substantially.  Kinsler makes up for his poor defense with his offensive performance, but it does cut into his overall value.

Still, Jon Daniels and the Rangers staff identified a real opportunity to improve here and seem to have leapt at it.