More on the great start, and recent career, of Zack Greinke.

In each and every chart below, you'll see Greinke's release point appears to have shifted.  It looks like he's a little a bit more over the top, but we'll wait for more data to accumulate, and I may apply some park corrections to the data as needed, before jumping up and down about it.  I'm confident that something is going on there, though, but cautiously so.

The pitch classifcations were lovingly made by yours truly, and will not match Gameday's in many cases.

Click each chart for a larger version.  Take it with some grains of salt, too, since PITCHf/x data isn't perfect, especially when making comparisons over time. 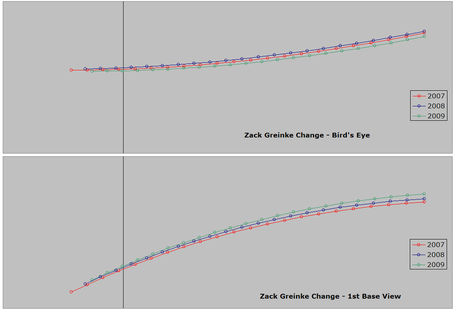 Greinke, as noted earlier, as cut velocity on the change-up, which you can see by the length of the flight path, but he's also added a little bit of tail, which is usually what happens when your release point comes more towards the top:  Sink becomes tail. 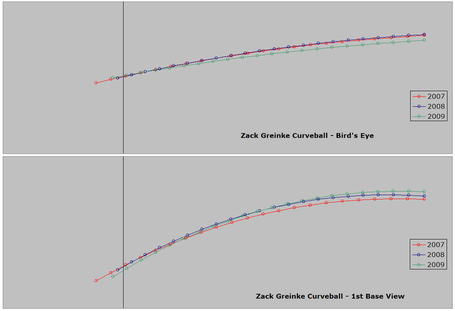 Greinke's curve looks snappier.  It is a little flatter at release with more bite near the plate.  By flatter at release, it looks like he's not putting much of an upward, hump creating, trajectory on it, relative to 2007 and 2008. 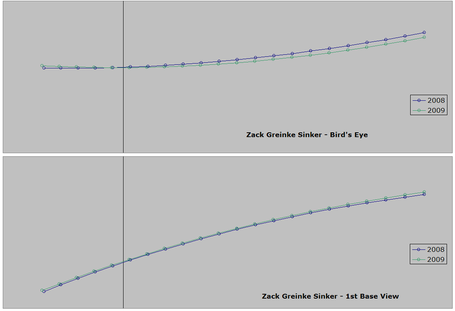 There aren't enough sinkers (two-seam fastballs) in 2007, if any, to include a path.  Not much sink lost, but some tail gained.  Impressive. 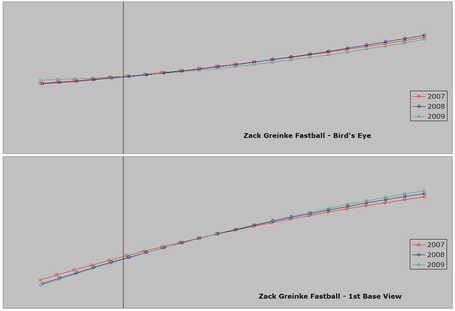 A little more tail on the four-seam fastball, too.  Seems like 2007's version lacked some of the downward tilt he's had more recently. 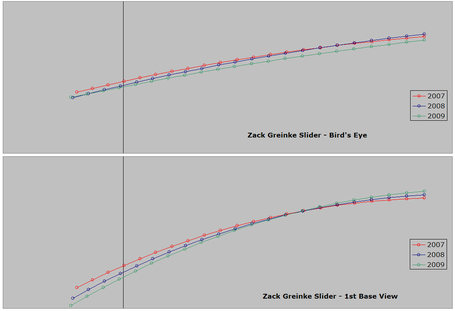 Again, a velocity change.  This time the slider is faster for Greinke in 2009.  He does vary the speed on the slider and curve enough to make this a dicey observation, but I think it's a pretty save conclusion.  And there's quite a difference between Greinke's 2007 and 2009 sliders.