When word broke around 11:30 a.m. EST about Manny Ramirez testing positive for a banned substance, and that a 50 game suspension was to follow, the world of baseball was rocked once again. Many have been accused fairly or unfairly, but Ramirez's name has usually stayed clear of suspicion. This is mostly because Manny has always been a power hitter and he was never a small man physically. There's also the fact that the guy is a hitting savant and he has...that swing. One would think that you would not need any enhancements with a swing like that.  In any event, Ramirez stands guilty as charged and will begin his suspension tonight. In his place will be...Juan Pierre.

I put together this graph on who most people in and around baseball would want on their team: Juan Pierre or Manny Ramirez. The data is unofficial, but staggering. 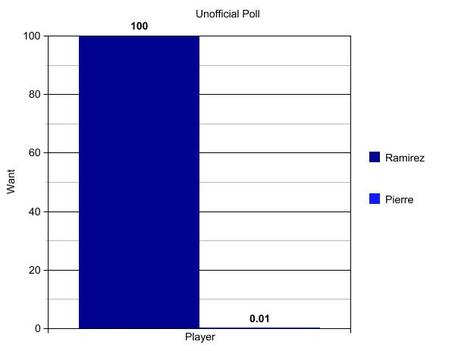 A few years ago, Juan Pierre was a nice lead-off hitter for the Colorado Rockies and Florida Marlins. In his first five seasons, he posted an OBP of .353 or greater four times and his lowest OBP in the five year span was still a respectable .332. Somewhere along the way his OBP dropped into the .320-.330 level. Recently, the most productive thing he has done was become a punch line in a Jay-Z lyric. A beneficiary of stolen base highlights and web gems, Pierre signed a five-year $44 million dollar contract with the Dodgers before the 2007 season. Let's just say that deal hasn't gone exactly as planned.

Pierre's play has fallen off in each of his first two seasons with the club and when the Dodgers acquired Ramirez last summer, Pierre became a well paid fourth outfielder/defensive replacement. There were rumors of him requesting a trade this off-season, and while I'm sure the Dodgers would've loved to shed his contract, there were no takers. With no space in the outfield in 2009, Pierre resumed his role as part time player/Manny Ramirez outfield caddy. With Manny Ramirez suspended, Pierre now returns to a starting role for the Major League's best team.

I'm not breaking any news to anybody when I say there is no way in the world the Juan Pierre can come close to replacing Manny Ramirez. Pierre could be a combination of Carl Crawford and Roberto Clemente defensively and it still wouldn't make up a quarter of the difference in offensive production. Including 2009, Pierre has been worth a total of 6.4 WAR over the past five years. In 2008 alone, Ramirez was worth 6.5. At his current pace, the loss of Ramirez should cost the Dodgers about 2-2.5 wins. This shouldn't be that big of a deal given the Dodgers lead their division by six games already and the fact that the NL West isn't exactly the AL East in terms of competition. Sure there will be some impact in the lineup, but the overall effect on the Dodgers should greater psychologically than in actual production on the field.

In limited action, Pierre is hitting .355/.394/.387 this year. Despite the nice OBP, Pierre is still only walking 6.1% of the time. The bulk of his OBP is coming from a higher than normal batting average, but this can easily explain by a BABIP that is about 50 points higher than normal. The best thing Pierre can do over the next 50 games is get on base at a decent clip, steal a few bags, and let Matt Kemp and Andre Ethier go to work behind him.

When Manny returns from maternity leave due to his female fertility pills, he will be more motivated and rested than he was when he joined the Dodgers last July. His absense will be a bit of a distraction in the interim, but Joe Torre is no stranger to these type of distractions and despite losing the best right-handed hitter* of my generation, the Dodgers even with Juan Pierre should be just fine until July 3rd.