Share All sharing options for: Zack Greinke Sinks His Way to Success

Polishing off classifications for Zack Greinke's PITCHf/x data was interesting.   The man's been through some changes (no pun intended).  Out of the bullpen for good, he's got some real separation on his change-up and, most of all, a love for the sinker.

Adding the sinker in 2008, and using it more and more since then, isn't the only thing different.  From pitch mix to velocity to speed differentials, Greinke's small sample bonanza has plenty to offer.  This post is just a start, I'm afraid.

This speaks for itself, Greinke's pitch mix by season. 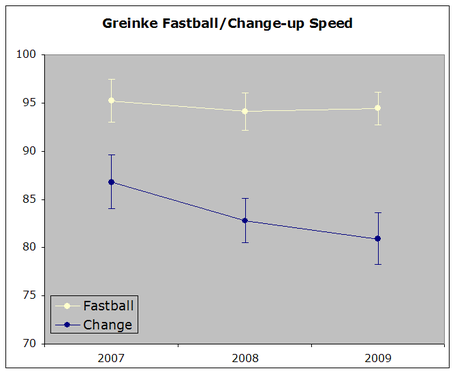 The error bars are set to one standard deviation plus and minus.  Notice how close the distributions are in 2007.  You might wonder if the change-up has gone past the point of being truly effective in terms of speed differential, but it's doing just fine.

On that note, he increased use of the sinker has been incredibly effective.

Let's take a step back first.

I'm using run value per 100 pitches (rv100; lower is better for pitchers) along with Whiff, nkSLG (total bases divided by all fair balls), Chase (swing rate out of the zone) and IWZ (strike zone frequency, with a 2 ft. wide plate and batter-by-batter top/bottom).  Data included is up to 4/29/09, his latest start is not in here.

Here are the details by pitch type.  I'll leave you with those and a couple notes.