Share All sharing options for: One Bad Inning, Four Earned Runs and 12 Victims For Joba Chamberlain

Joba Chamberlain sucked last night...in the first inning.  His first inning line read  like this: 1 IP, 5 H, 4 ER, 0 BB, 0 K 36.00 ERA. He gave up those four runs on five hits including a Jason Bay three run shot before recording his first out; a liner to Nick Swisher. After that first inning...he got good, really really good.

Over the next 4.2 innings, Joba would give up just one hit and two walks. In the meantime he was busy striking out 12 of the next 18 hitters he faced. He did a fantastic job of mixing up four pitches: four seamer, curveball, slider and change up, and used all of them to get strikeouts. One concern about Chamberlain in 2009 has been velocity. In 2007 and 2008, his fastball registered at an average speed of 95-97 miles an hour. In 2009, that is down to 92. Once again last night he was around 92 for most of the night, but the good news is as his pitch count went up, so did the velocity maxing out at 95.8 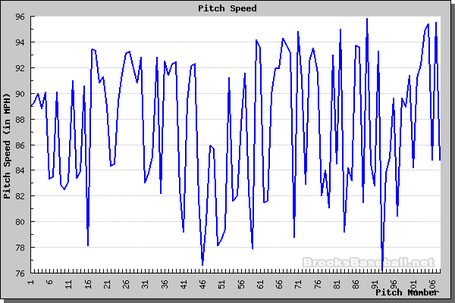 Overall, he only got around 7% swinging strikes, and by the third or fourth inning he was getting a little bit of the "benefit of the doubt" calls especially on the outer half to lefties. Nine of the 12 strikeouts were called third strike, however it was 12 strikeouts nonetheless. 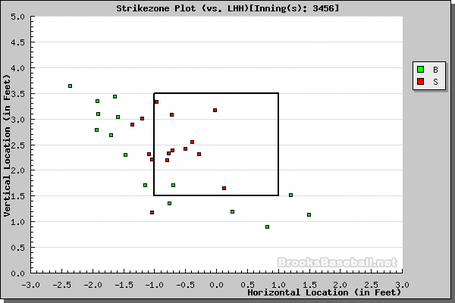 The bad thing about racking up a lot of strikeouts is usually you're also racking up a lot of pitches and thus was the case for Chamberlain. He used 80 pitches in the 3rd, 4th and 5th innings and had to be lifted two outs into the sixth inning having already thrown 108 pitches. Keep in mind Chamberlain had yet to throw 95 pitches in a game this season. Joba may have been the loser in the game, but he made plenty of guys in that Boston lineup feel the same.