Historical WAR Between Hitters and Pitchers

Share All sharing options for: Historical WAR Between Hitters and Pitchers

With Sean Smith releasing historical WAR for pitchers, we can take a look at how they compare with the hitters.  Here are the top twenty five players in career WAR, including seasons 1955 and after.

There are two active players on that list, Alex Rodriguez and Randy Johnson.  ARod's only 10 WAR from moving into sixth all time ahead of Mike Schmidt, but would need a dozen more WAR to catch Rickey Henderson and the top five, and another few MVP-caliber seasons to catch Roger Clemens.

The best of the best -- Barry Bonds, Willie Mays, and Hank Aaron -- are, as expected, hitters and are three of the all-time best players.  Willie Mays' total even ignores a few seasons that came before 1955.  6 out of the top 7 and 8 out of the top ten are also hitters.  Is it possible for Clemens and Tom Seaver to be underrated?

The top 25 currently contains 15 hitters and 10 pitchers, perhaps a few more pitchers than I would have guessed.  If you look deeper, at the top 100 players, you find 73% are hitters.  At spot 150, a strange thing happens.  Here, take a look: 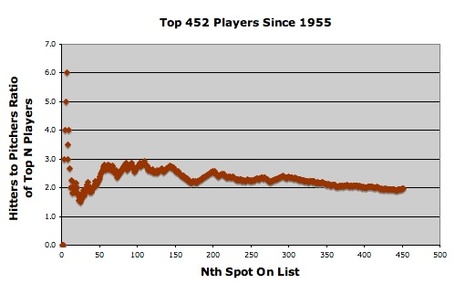 Basically, between players ranked 150 and 200, the front half contains a strangely large percentage of pitchers, while the back half contains a strangely large percentage of hitters.  My first thought was that perhaps this is where the best relief pitchers started to fall.  But that doesn't explain the resurgence of the hitters.  And the gap is only from 48 WAR down to 42 WAR, not that wide of a range.  Statistical oddity?  Here, you decide:

Going back to the graph, there are some other interesting things to notice:

Note that I'm only showing the top 452 players on the graph, because that's where the 300th ranked position player (Bill Mazeroski) falls.  Everyone after that would be pitchers, because Sean doesn't go beyond the top 300.

The short story?  We probably underrate pitchers, especially those outside the inner circle of Hall of Famers.  Might that be because we've seen so many inner-circle HoFamers pitch in the last generation and take them for granted?