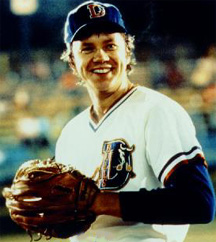 Right-hander Ebby Calvin Laloosh, last year's 1st round pick of the Tampa Bay Devil Rays organization, finally made his professional debut for the Durham Bulls this last Saturday.  He didn't take any pre-game warmup pitches, so fans were wondering if he was actually going to start.  He did take the field on time, though he seemed a little disheveled.  No word yet on the odd behaviour.

After taking his warm-up pitches, he uncorked his first pitch, a 95MPH fastball that nearly took out the public address announcer.  On his next pitch, he hit the leadoff batter, Willie Foster of the visiting Peninsula White Sox, in the back.

The first inning was a rough one for Ebby, but he must have gotten some advice from the dugout because he seemed to bend his back more on his follow though for more control the rest of the game, although he still wasn't great.  Ebby seems to have a limited arsenal of pitches since he continued throwing his semi-controllable fastball the entire game.

Fortunately for us, Durham was one of the first minor league stadiums to have Pitch F/X available for each home game.  Here is his location chart from Ebby's first start: 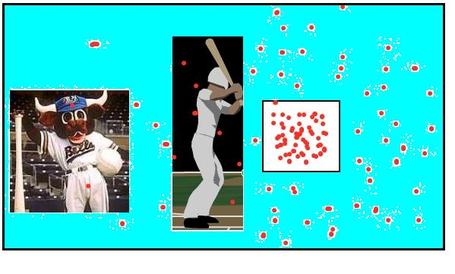 Ebby's last five pitches, clocked at 96, 98, 97, 97, and 97 MPH, were faster than his first five pitches.  This may be a sign of good stamina or it might be the side effects of not throwing any warm-up pitches.  He has the ability to dominate hitters as evidenced by his 18 strikeouts (a new Carolina league record), but will need to find some control as he also walked 18 batters (another new Carolina league record).  Besides all the walks, he hit the Bull mascot twice.  The mascot is reportedly doing fine.

All in all, it was an interesting debut for Mr. Laloosh.  He seems to have some definite major league tools, but needs some major refinements.  He should add a curve ball to his arsenal or he will be the second coming of Kyle Farnsworth.  Manager Joe Riggins has done a good job tutoring the current Tampa Bay pitchers, but this looks like his toughest assignment yet.  All I know is that Ebby will be interesting to watch over the season.