Or, What the Reds are to pitching, the Royals are to hitting.

Our own erik has been writing about how teams have done in various drafts with their first round picks, and in several cases these high round picks have accumulated negative WAR at the major league level. I wanted to see which teams actually allow players to continue to play in the majors and accumulate losses for their team.

For my study, I looked at players from the last five years that had a negative WAR for a season from Fangraphs. If the player played for two teams in the same season, I only took the partial negative seasons. Since I got the data from Fangraphs, I could only find players with a combined negative WAR. I am sure a missed a few players that had negative value for one team and larger positive value for another. I was not going to go through and look through each positive value, so my final numbers might be a little less negative than they should be.

Besides adding up the five year totals in negative WAR, I counted the number of players a team let accumulate -0.5 WAR in a season. I wanted to see if some of the teams were having to put players with marginal talent on the field, but then being able to notice they were not helping the team. The player could start accumulating negative WAR and then the team tries another player.

Now that the background information is done, let's look at a chart and graph of the results: 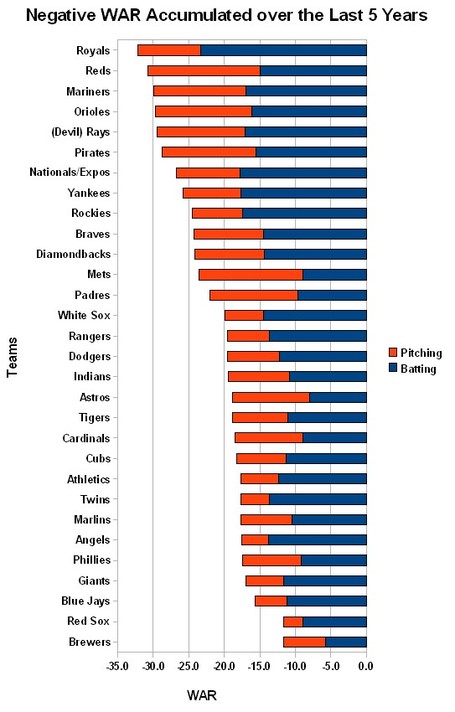 I know teams won't ever be able to eliminate below replacement type players from playing entirely, or mediocre players from playing poorly for stretches, but it is obvious that some teams could definitely do more than they are currently doing to put a minimum level of talent on the field.