Graph of the Day: Jim Palmer and Mike Cuellar

Share All sharing options for: Graph of the Day: Jim Palmer and Mike Cuellar

The end of the 60s was a start of an era for the Baltimore Orioles.

In 1969 Jim Palmer came back from arm surgery. Mike Cuellar, a 32-year old veteran, came over from Houston. The two would go on to anchor the Baltimore rotation for eight seasons.

These were Orioles starting pitchers during the first and final seasons of that run, according to Baseball Reference:

Cuellar was released in December of 1976, but pitched one more year for the Angels at the age of 40. He first come up as a 22-year old, but his next trip to the majors was five years later. He certainly made-up for lost time.

Oh, right, a graph. Career WAR #'s, with the median HOF line included (from Baseball Projection). Palmer conveniently has the same 19-year career as the median. 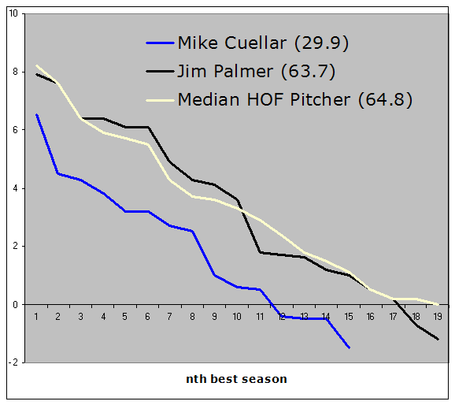