I promised myself when I took this gig that I would try and keep my Rays posts to a minimum. So far it's worked out, however, I'm going to take this time to write about the 2009 debut of a certain Rays pitcher named David Price. Over at my home base, there has been plenty of debate about Price. It started in early spring training and has continued with every passing day he spent in Durham. Most agreed it was best for him to start the season in the minors as Price is not a finished product. We saw some of that in his  '09 debut. There was good, there was bad, but David Price was finally back in the majors.

Price was on a strict pitch limit in Triple-A. He was limited to around 75 pitches and never went past 82 in a start. Joe Maddon said the Rays would set him free once he got to the big leagues and he did not lie. Price threw 100 pitches tonight; however it only bought him 3.1 innings. The big problem for Price, as has been his problem all along, is pitch efficiency. It was the main reason for him starting in the minors and tonigt it was the reason he received a no decision despite his team spotting him a 10-0 lead.

Price threw only 57% strikes on the night despite registering six strikeouts in three and a third. The problem was deep counts and walks. He had six at bats go full and walked five batters. He had seven at-bats of seven or more pitches including one 11 pitch affair. Obviously, if Price is going to be a successful starter these numbers are going to have to be drastically reduced. In his defense there were some borderline calls that could've gone either way, but overall something he needs to work on. 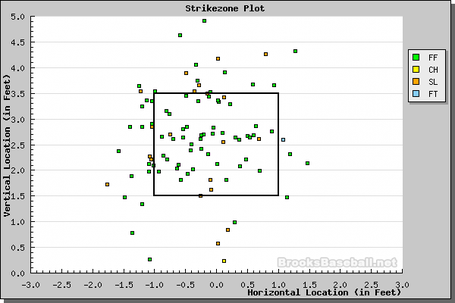 One of the bigger debates on Price was pitch selection and usage. He was extremely successful in the 2008 playoffs as a two-pitch reliever, but again the majority of us felt to be a the stud we think he's going to be, he needs to have a third offering. Price spent most of the spring and probably a good number of his pitches in Durham developing and working on a change up. Nonetheless, that third offering was no where to be found tonight. According to pitch f/x, Price threw 77% fastballs and 21% sliders. His third offering, the change-up was thrown just once. Even though they weren't classified as curveballs, it seems that Price's new pitch, a spike curveball, was thrown twice. You'll notice these two sub 80 mph outliers on the graph below. 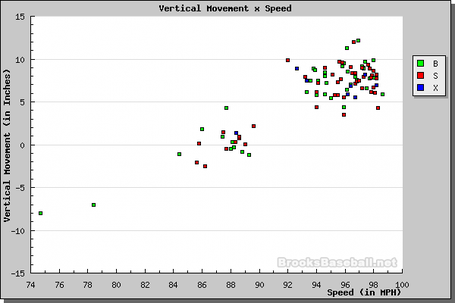 The good news is Price had excellent life on his fastball. He was getting good vertical and decent horizontal movement on the heater which came in at an average of 96 mph on the night. His hardest pitch would register at 98.6 mph on the radar gun. The slider, which at one point in the spring was lost, had some of the same bite we saw last season and registered at an average of Andy Sonnanstines fastball or around 87 mph, and maxed out around Scott Kazmir's 2008 fastball or 89.6 mph. He got 7% swinging strikes, which is down from the 9.6% he averaged at Durham

Overall, what you saw was the best and worst of David Price. In the first inning, he allowed a walk and a double to start the game before man-handling the 3-4-5 hitters in the Cleveland lineup and striking out the side. Truthfully, he reminded me a lot of the man he replaced in the rotation. A few years ago, a younger Scott Kazmir would have had a similar outing; flashes of brilliance, but far too often his worst enemy. For Price to go deeper in the game he is going to need that third pitch to keep the hitters off balance. There were far too many deep counts and foul balls. I'm sure there will be more of these "learning experience" starts along the way, but as a Rays fan, I'll be enjoying every minute of it.