Hey Look! A FanShots Round Up

Share All sharing options for: Hey Look! A FanShots Round Up

You remember these, right?

To those of you not in the know who look forward to the reviews of recent FanShots on the front page, I'd like to apologize for being pretty busy lately. But I'm not so busy tonight, so here we go! 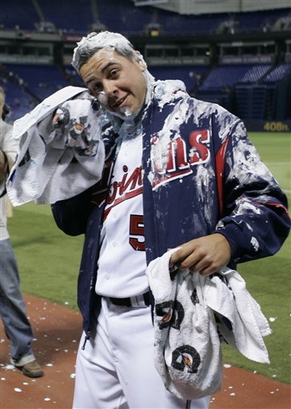 For anyone who's forgotten, you can go in to My Dashboard to put more FanShots on your front page if they're moving too quickly for you. You can also click the FanShots link at the top of the page to open up an entire page of all the neat stuff you can find down there.

The BP Idol entries are out there and ready to be voted on. I'm among those pulling for Jeff from Cotts Contracts. I just use his stuff too much not to.

Did you know that Jack Kerouac may have been the first fantasy baseball player? Pretty interesting. And kind of weird.

TusconRoyal shared his new favorite t-shirt with us.

This is what happens when my life is being consumed by a whip-cracking mouse: I miss the things I love about the interwebs. I even missed the fact that Derek Holland got his first start until just now (is this what parents feel like working away while their kids grow up?). And I missed FanGraphs somehow becoming more awesome by adding pitch type linear weights. I just don't know anymore. I've said a couple times something to the effect of "FanGraphs is now as great as could possibly be." I'm going to stop saying that so I'll stop being wrong.

Not exactly baseball related, but BigBlueShoe of Stampede Blue took on Indianapolis Star writer Bob Kravitz on the radio over the credibility of blogs in the media market place. This sort of stuff makes me smile.

Joe Posnanski helps put another nail in the coffin of the stupid "he'll be the last person to ever win 300 games!" hyperbole.

Minute Maid Park is ridiculous. And by "ridiculous" I mean in the fun way that makes baseball's individual parks entertaining.

Dan took a look at the concept of stealing home, and suggests that teams steal at far too much better a rate (60%) compared to the break-even point (35%) to not be attempting the strategy often. I tend to agree, but remember Bill James suggesting not stealing home is more a safety concern than one of risk. Anyone have anything to add?

As usual, much of the greatness in these FanShots comes from the discussion. Click on the links, have a look, and keep the juices flowing!