Share All sharing options for: Graph of the Day: Closers of the 1980s

Don't you groan when you hear people quoting arbitrary stats like Mark Grace had more hits than anyone else in the 1990s?  Me too.  But they are fun.  The top three closers of the 1980s were, arguably, Jeff Reardon, Lee Smith and Dan Quisenberry.  They all debuted in 1979 or 1980, and only Quiz had a short career.  Smith and Reardon both played into the 1990s.

During the 80s, they each populated a spot in the top 3 total saves and most seasons with 30 or more saves.  Here are their WAR numbers.  This isn't a HOF story, so no baseline is provided.  Just let me enjoy my youth, alright? 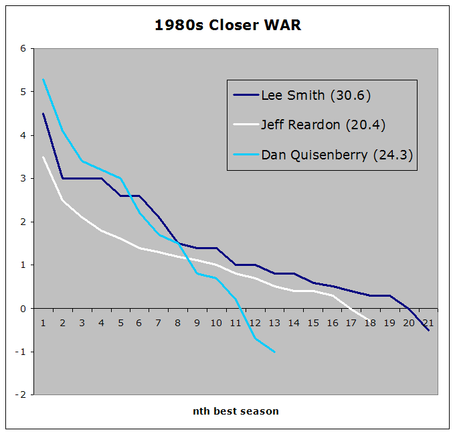