There has been discussion in the comments sections of a couple of recent articles (here and here) about what values should be used as a baseline for comparing players' seasonal wins above replacement (WAR). To address that issue, I incorporated work done by JBrew with several other suggestions and I came with a an average HOFer and replacement level HOFer (minimum value for induction) for pitchers and hitters.

To get the values I used the following procedure:

Here are the values in graph and tabular form: 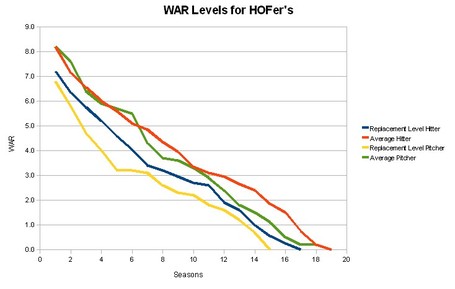 Data tables are after the jump:

The following is a chart of players whose career WAR totals closely match each of the four defined WAR trajectories.

Feel free to use these when creating WAR graphs so we have a general comparison between graphs, and let me know if there's any way to improve the methodology.