Share All sharing options for: New Arms of the Week: May 11-17

Another week of debuts.  Another position player, Josh Wilson, got to pitch.  Wilson was subsequently waived by the Diamondbacks and picked-up by the Padres, but to play shortstop.  On to the real pitchers.  Or real-er.

Bard throws hard.  Augenstein throws maybe three pitches in his sinker/change-up continuum.  He doesn't throw hard, but he slings it. 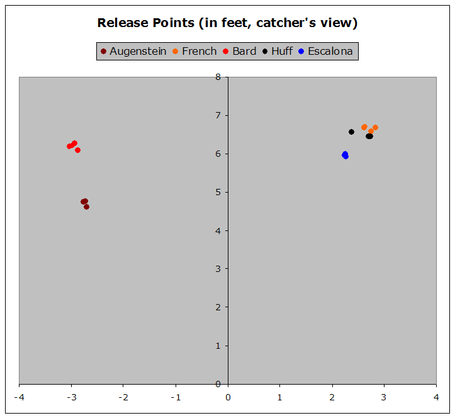 Each of a pitcher's dots represents a the average release point for a specific pitch type.  Huff releases his fastball from a different spot, otherwise they're all pretty consistent.

That's it for this week.  I suspect Bard will be most likely to be profiled in detail.