Share All sharing options for: Members of the 500 Home Run Club Not In The Hall Of Fame

With Gary Sheffield just joining the 500 home run club as its 25th member and Jim Thome about to tie Mike Schmidt for 13th on the all-time list, I thought I would take a look at the group of ten players who have hit 500 home runs and aren't in the Hall of Fame.

To define the average Hall of Fame position player, I used JBrew's research based on Sean Smith's historical WAR.  According to the data, the median WAR of the Hall of Famers since 1955 is 70.6.

First, here are the ten current members of the 500 HR club ranked according to their career WAR through 2008:

What really sticks out here is that McGwire and Sosa are in the top ten in home runs, but are the last two in total WAR.   The other glaring issue is that seven out of ten of these players (all except Griffey, Thomas and Thome) have been linked to PEDs in one form or another. I really want to see how the HOF votes for some of these players.  McGwire was the first to test the voting waters and while results haven't been good, he has the second lowest lifetime WAR of the club.  It's tough to tell how much of the lack of McGwire love is linked to his usage of PEDs and how much is because he wasn't that good of a player. The real test will be when Bonds is eligible and how the voters react to his candidacy.

Beside just total WAR, I believe a player should be measured on what they did during the prime of their careers. The following chart has the ten players' total WAR along with their best three seasons and their best consecutive three seasons: 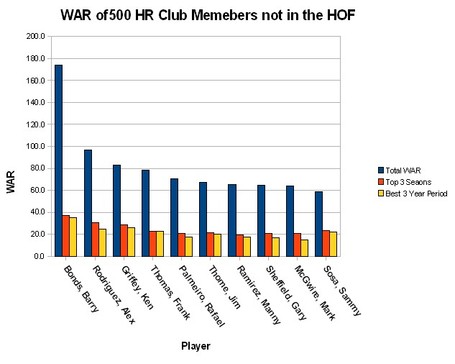 I originally graphed all ten players and the average HOF numbers together in one graph, but it was way too confusing. So instead I grouped the players by career WAR, with the best three in the first graph, followed by the middle three, and then the bottom four.  The average HoFamer line is included for context. 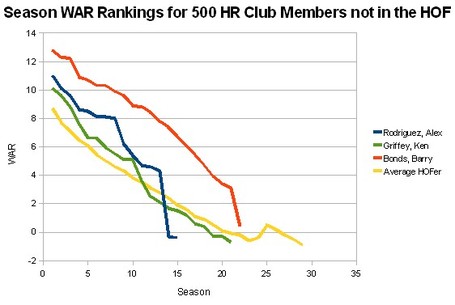 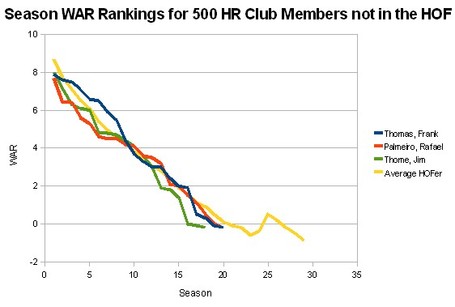 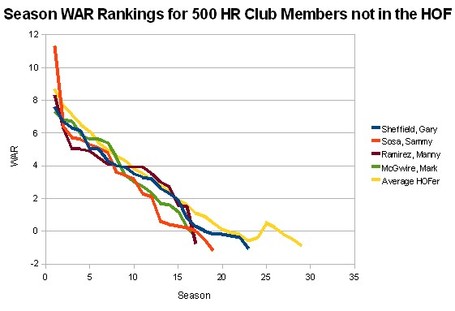 Out of these players, the only one I bet would bet making the HOF on the first try is Griffey, while it seems like Thomas and Thome should eventually make it in. The other seven all have the PED headlines hanging over them, so whether they make it or not likely has more to do with how the HOF voters deal with PEDs than their actual productivity levels.