With some exhibition tune-ups in big leauge parks this weekend, we have an opportunity to scout some prospects via PITCHf/x.  Much like the World Baseball Classic, we're getting an early, and possibly final, look at some young pitchers.

With just a couple games on Thursday night, I'll start slowly and look at one prospect, Mason Tobin.  Based on his stuff, this won't be our final look at him.  The Angels farmhand does need to be more consistent, or so it seems, at getting the ball down.

Technically entering his age 21 season, Mason Tobin will 22 on July 8.  Tobin has struck out 7 per 9 IP so far as a pro, and his 2.3 K:BB rate is fair. He's played no higher than the Midwest League, and isn't part of the Angels 40-man roster.  But he's on the radar screen, as Baseball America recently rated Tobin the Angels' tenth best prospect.

Tobin faced four major leaguers in the 6th inning in Dodger Stadium - Russell Martin (GO), James Loney (Single), Matt Kemp (K) and Casey Blake (FO).  That's not a lot of pitch data to go on, but it is better than nothing.

First and foremost, Tobin was throwing hard - fastballs came out of his hand anywhere from 94.5 mph to 97.3 mph.  His off-speed pitch was slurvey, checking in at 76mph with good lateral break.

Facing Martin to start the inning, Tobin unleashed three straight fastballs up in the zone.  The second was probably a two-seamer, and was called a ball.  On a 1-1 count, Martin took his first swing, grounding out to the shortstop.

Loney also got nothing but heat.  More sinkers, though.  Tobin fell behind 3-0, putting one in the dirt.  Tobin got lucky on his fourth pitch - just barely on the inside corner.  Loney fouled two more off, the latter with a full count.

With Loney aboard, Tobin again starting pumping fastballs out of the stretch.  It looks like he lost a little bit of his velocity - whether that was his adrenaline settling down, fatigue setting in or going into the stretch is up to you.

Against Loney and Martin, Tobin's fastballs ranged from 95.0 to 97.3.  Against Kemp and Blake, his fourth hitter, he only got above 95.2 once, and that was his last pitch (96.2).  Even Tobin may have lost a bit of the fastball, he did introduce another weapon - the slurve.

Tobin's slurve has some nice lateral spin movement on it.  He throws from a fairly low arm slot, and as mentioned above, isn't a slider or a curve.  Given his fastball velocity, you'd expect Tobin to throw a slider in the 80s, not the 70s.  Tobin also released the pitch a little higher than he did the fastballs.

The first slurve Tobin threw against the Dodgers was on a 2-2 count to Kemp.  It was up and in, but Kemp offered and whiffed.  Compare it (in gold) to the previous two fastballs to Kemp (blue was a 1-1 take, red was a foul ball to even the count). 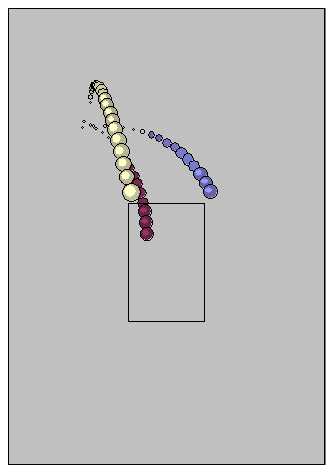 You can see the release point and the hump, telltale signs of a curveball.  Or a slurve.  The slurve to Kemp got the job done, so Casey Blake probably had an inkling he'd see one, too.

Blake took a first pitch slurve that just missed below the knees.  That pitch was really nice, almost a front-door strike (blue).  That was the end of the off-speed stuff, as Blake took a fastball up in the zone for a strike (red) before flying out to Torii Hunter on another fastball, this one dialed back up to 96.2 mph (gold). 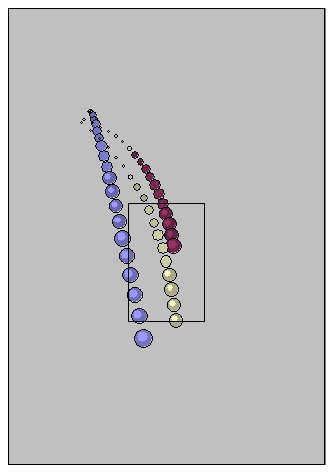 That last pitch (gold) was just at the knees, could've been called either way, but Blake gave it a go, and was retired to end the inning.

Tobin looks good, throwing very hard with good movement.  I wonder if he has another pitch that he didn't use (a change-up, perhaps?), but the fastballs and the slurve should work nicely in relief.

Still, he tended to keep the ball up in the zone.  This graph goes pitch by pitch, showing the height of the pitch (in feet) when it crossed the front of home plate.  I've drawn lines around 1.5, 2.5 and 3.5 feet, and vertical marks between each at bat.

Blake saw the only pitches at the knees, and pitches above 2.5 ft out paced pitches below by 2-to-1.  As a matter of fact, only three pitches came in less than two feet off the ground, giving a high:low ratio of 5:1.