Graph of the Day: Maddux vs. Clemens

Share All sharing options for: Graph of the Day: Maddux vs. Clemens

My first attempt at one of these things, and I thought I'd make it a graph I've been interested in doing for a while.

Here are arguably the two greatest pitching careers any of us have ever seen, put in to graphed form using Wins Above Replacement to grade their performance: 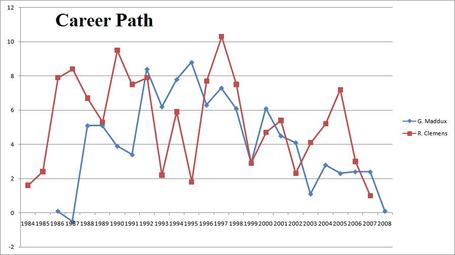 The two of them rank first (Clemens by a wide margin) and fourth (Maddux just 0.1 behind Niekro) among pitchers in total WAR since 1953.

I once did a graph pretty similar to this using ERA+ or something, and it came out with a similar but more pronounced chart. Basically, Maddux had a brief peak period where he was better, and Clemens had the best seasons of them both on bookends of that. And the second thing you get from looking at this, of course, is: both of these guys were incredible.

They are actually a fairly good set to compare straight up. They played a similar number of seasons (one more for Clemens) and pitched a similar number of innings (92 2/3 more for Maddux). Clemens has the edge in most areas at first glance, with a 31.6 career WAR edge and more seasons above six, seven, eight, nine and ten wins than Maddux had.

Of course, how much -- if at all -- you choose to discredit Clemens for questionable late-career performances is up for a debate I'm not going to get in to, but something else that should be pointed out is the strike years.

Maddux's best seasons came right during the MLBPA strike of 94-95, which lowers his potential WAR totals. If we prorate both of their performances over a 162 game season in those years (simple, but just for a quick look at what may have been missed), that period of history looks more like this: 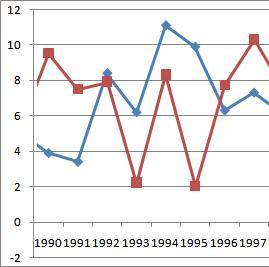 That actually makes a pretty significant difference. Maddux picks up a two-year span of 20 wins and it gives him probably the better peak (though Clemens had two), and the best and third best seasons of the two (and also gives Clemens another 8+ WAR year), though it only pulls him to withing 0.8 of Clemens over their careers (though it pushes him past Niekro and almost to Seaver).

I don't think we have an open-and-shut case here, despite the career advantage for Clemens, and I'd be interested in hearing who everyone here thinks was the better pitcher.

And, of course, here is your nth best season graph (sans the strike adjustment): 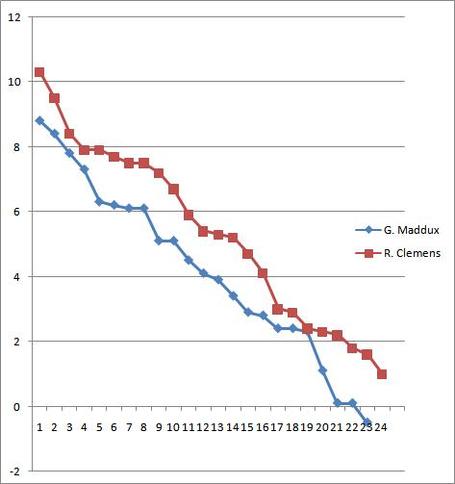