I took notice of Esmerling Vasquez on Monday when looked a debut performances of the previous week.  He did indeed face the Cubs last night, and got in two innings of work.  He showed his sinker quite a bit, after not using it in his first outing.

Vazquez has had an interesting trip from the Dominican to Phoenix.  He's 25, about 6'1" and 175.  Signed as undrafted free agent in 2003, Esmerling saw action in Rookie and Short-A in 2004, moving up one more level per year before a very brief repeat of AAA before his call-up.

His rate stats have taken an interesting path, starting with his first full season, at Low-A (2005) and ending in AAA (2008) [source]:

Clearly, command hasn't been his strength.  His numbers rebounded to normal levels in his 9+ innings in Reno this year, so hopefully 2008 was just a blip.

Vazquez appears to have been converted back into a reliever during 2008.  He started more than half his A+ games and all of his AA work came as a starter.

His pitches were pretty easy to classify:

Vasquez puts a lot of tail on the fastball, and his sinker adds more sink than it does tail.  And you can see a hump on the slurve.  Click images to enlarge.

Here's how I arrived at those classifications:

On the left is pfx_x and pfx_z (in inches) and the right is release point corrected spni axis and mph.  Bubble sizes are MPH on the left, RMP on the right.

Notice the new color for sliders, based on feedback from a reader with partial color blindness.  Hopefully this helps some folks out, as the old color was indistinguishable from a fastball.

Another reason why the slider is a slurve is the release - he comes a little over the top.  Otherwise, exlucing one fastball, he's pretty consistent.  His plate locations, on the other hand, are another story.

Layers and slices view of the plate locations - remember, the fat is 10 inches, the in/out are 7 each.  Up/middle/down are even thirds.  High/Low are out of the zone, as are Wide/Tight. 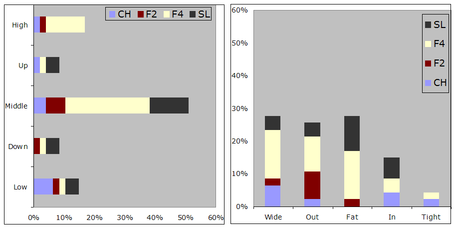 Esmerling doesn't use the bottom or top of hte zone very well, does he?  He does a reasonable job of keeping pitches out of the fat of the plate, but at a cost.  He misses a lot off the plate.  I do like the sinker locations, though. 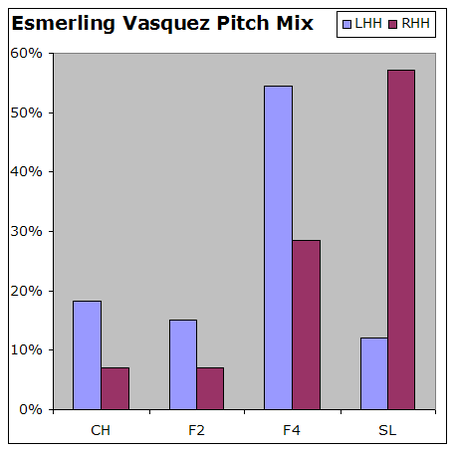 Lots of slurves to righties.

Skinny kid, live arm, fairly low slot, lots of movement.  He can learn to control it he could be something.  I like his release point distribution, as much as one can judge from PITCHf/x, so I would presume that's a good sign for improving his consistency.  Check him out if you get a chance.