Share All sharing options for: What You Missed in the FanShots While Your Scroll Wheel Was Broken

This is later than I meant for it to be because Sky made me want to play a few minutes of Contra. I almost got through the first level!

So, without further ado: here's what excellence you can find in the FanShots from the last few days. 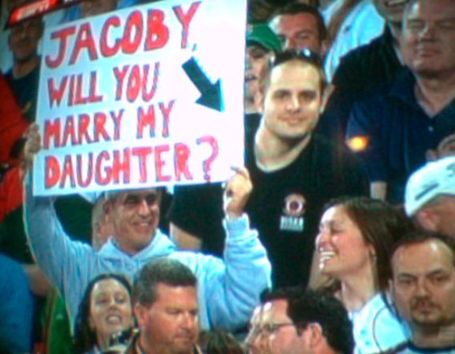 Courtesy of Deadspin. Insert your own "stealing home" jokes in the comments. That was one of the coolest things I've ever seen watching baseball, by the way.

First thing's first: even though it's not even Christmas yet, we all get two awesome presents! First, Sean Smith delivered us a historical pitching WAR database. Then, TusconRoyal and his brother gave us the entire 2007-08 PITCHf/x database in to one SQL file. Wheee!

Brendan Scolari supplied his own analysis of Clayton Kershaw's domination of the Giants vs. his melt down against the Astros. The results are interesting enough, but what I find the most intriguing are the discussions on PITCHf/x itself, both in the BtB comments and the comments at True Blue LA. Over at TBLA, Harry chimed in with some excellent pearls of wisdom on various PFX issues, including the inaccuracies between different parks' reads.

Sky linked to a DRays Bay post discussing a man named Jaime Cevallos and his ability to make Ben Zobrist a better hitter.

Forbes unveiled their annual look at the monetary values of every MLB franchise. Spoiler: the Yankees are first. (I should have hidden that, I suppose.) Additionally, The Biz of Baseball did their own analysis of the Forbes data.

In my favorite FanShot of the last couple days, Harry delivered an article from the Hardball Times analyzing the run value of pitch locations. I don't have anything else to say about this, it's just spectacular. If you haven't clicked the link yet, there's a problem.

The Baseball Analysts took a hard look at what's wrong vs. what's unlucky with a projection system like PECOTA, and updated the projected standings through the first three weeks.

TusconRoyal gave us a Baseball Musings post on positional-specific aging patterns in baseball. Complete with a chart that looks like a giraffe! SamT countered with a graph from Around the Majors about the ideal height for Major League pitchers. His graph doesn't look like a giraffe, though, so it's not as useful.

There's more than that, this is just the creme of the crop (plus some stuff I posted), so always remember to make the Beyond the Boxscore FanShots a regular part of your daily routine (skip breakfast if you have to). There's always good stuff and good chatter, and more chatter is always welcome. And please bring in all the cool baseballs stories and analysis you find from your own corners of the internet and share them.

Also, while I'm writing this, Dexter Fowler has five stolen bases through the first six innings.

And while I have your attention: can someone tell me the linear weights value of stealing home?