The Seattle Mariners are off to a good start, helped out by some surprisingly good pitching by Jarrod Washburn.  A lot of folks had given up on the veteran lefty, but he seems to have made an significant adjustment that may be making a big difference this April.

Washburn is a five-pitch pitcher, using a fastball (four-seam, F4) a sinker (two-seam, F2) slider (SL) curve (CU) and change (CH).  Against lefties, Washburn typically discards the change, while it's the slider that gets shelved against righties.

Washburn will throw a fair share of sliders to lefites, but his pattern is really dominated by fastballs and supported by the rest.  Until this year. 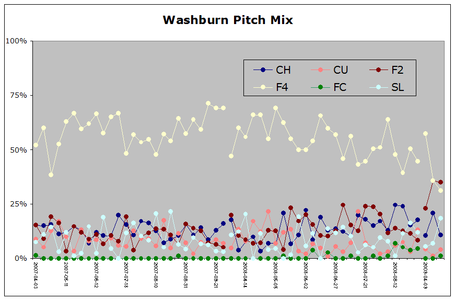 I broke the lines where the years change (click to enlarge).  You can see a big spike in sinker (F2) usage, especially in Washburn's second and third outings.

The biggest change is against right-handed batters, and early in the count. 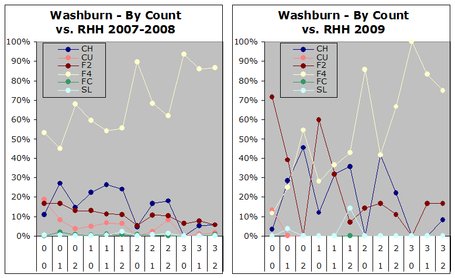 I realize that right pane is messy, but that's kinda the point.  First and foremost, over 70% of first pitches to RHH have been sinkers this season.  It was less than 20% over the prior two years worth of PITCHf/x data.

Beyond the increase in sinkers, Washburn is also throwing more change-ups in some counts.  He's still sticking with the four-seam fastball with three balls.  Which is interesting, since he's been owning the zone with the sinker this year.

Washburn is throwing the sinker for strikes over 70% of the time, while he was in the lower/mid 50's in years past.  That's using a two-foot wide plate, which is how the game is typically played and called.

70% is a very high rate, and isn't likely to be sustained.  For now, it's enabling him to get ahead of a lot of hitters.

Without regard to balls in play, there has been a jump in Washburn's ratio of getting ahead to getting behind when throwing an 0-0 sinker (this covers both lefties and righties):

And the sinker is being put in play less (or the same) on 0-0 counts:

I should note, to date, he has given up some solid hits off the sinker and isn't missing many bats with it.  That's a function of being in the zone, and possibly some luck.

At this stage, there's luck running rampant all over the place.  As long as Washburn has hitters off balance and is throwing strikes, the sinker could very well be a key to his new found success.