Forget the 8-7 loss to the Blue Jays in extra innings. Ranger fans have to be ecstatic after witnessing Derek Holland's major league debut last night.

For those of you  who don't follow the minors, Holland came out of nowhere last year to land on most prospect-nik's Top 50s. One of the last draft-and-follows signed before MLB changed their signing rules, Holland has always been blessed with exceptional command. What really excited scouts was the upticks in his velocity with each season. He was 89-91 in his season in JUCO, 90-92 in his professional debut in short-season Spokane and then up to 93-98 mid-summer last season, with movement. Holland pitched at three different levels, playing mostly in High-A last year and reached AA before season's end.  In just 221.2 minor league innings, Holland racked up 245 punch-outs to just 64 walks before being called up to the Show. While he's starting his career as a reliever, there's no question the long-term plan is starting for Holland.

Holland threw 42 pitches last night, 36 fastballs. His velocity was as good as advertised, throwing 94 on average and topping at 97. He only threw 4 sliders, averaging 85 MPH.

Here's a look at his movement thru pitch f/x -- 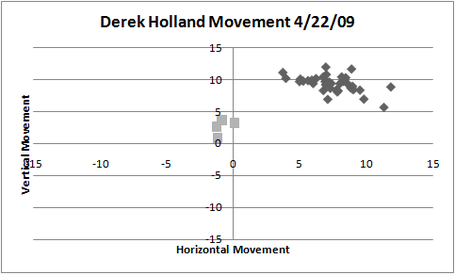 And now his speed vs. horizontal movement-- 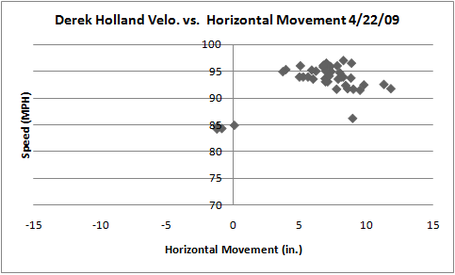 Holland's second best pitch is his change-up, which we didn't really see last night. Most scouting reports say that his slider needs some refinement, but it looked alright to me in the very few he threw. One of them made Aaron Hill nearly fall down.

Another season, another crummy Ranger starting rotation. It shouldn't be long before Holland is in the rotation for good. The sooner, the better.