Xavier Nady is likely out for the year. Damaso Marte is sporting an ERA of 21.00. Meanwhile, in Pittsburgh, Ross Ohlendorf threw seven innings of 2-hit ball against one of the hottest hitting teams in baseball. Life is grand for Yankee fans. 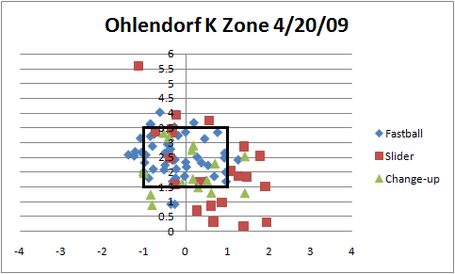 Ohlendorf is at his best when he keeps the ball down and he did an exceptional job of that last night. He hit both sides of the zone with his fastball and painted the corners. He missed on a few sliders perhaps in hopes of getting batters to chase, but only got three swinging strikes on the pitch. 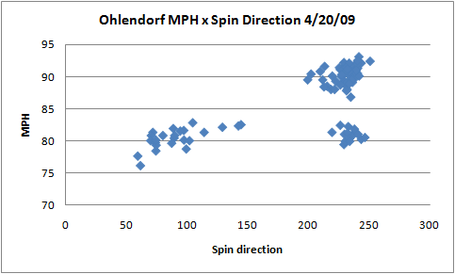 Spin direction is simply the direction in which the pitcher spins the ball when he releases a pitch and can be a good way to classify pitches. Ohlendorf is mostly straightforward, you can easily pick out the fastball, change and slider. He does throw a four-seam fastball and also two-seamer that pitch f/x didn't classify quite right at times, which we'll get to on the next graph here... 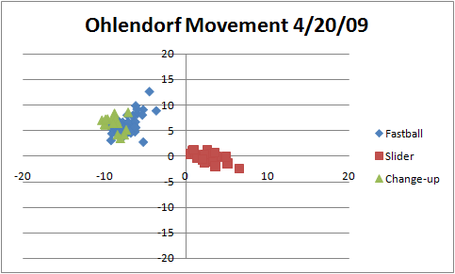 You can see there is certainly some sink to his fastball. Pitch f/x only classified three, so I just lumped them altogether with his fastball. You can see he threw a few of the straighter four-seamers but mostly relied heavily on the sinker, which was his bread and butter last night.

Finally, there's his a look at his average velo along with the average movement per inches on both planes on his pitches. Out of the bullpen Ohlendorf was known to throw as hard as 96, but all night he topped out at 93 and threw nine fastballs under 89 MPH. Ohlendorf thrived off of control in the minors, but also been known to get into trouble with walks in the big leagues, so perhaps he's traded some velocity for some control. He still has some "reach back" velocity when he needs it.

There is nothing super-special grabs your attention about Ohlendorf, but at least for right now, I think Yankee fans would be more than glad to have him back. If he can continue to throw strikes with his sinker, he'll be a nice, low-cost member of Pittsburgh's rotation.