There hasn't been a FanShots summary in a while, so for those of you who have been out for the last few days (because I'm sure everyone cruises the FanShots regularly when they aren't), here's a little summary of what you may have missed.

There's some great stuff that goes on in the FanShots, and Beyond the Boxscore's committed to making that an important section of the site. It's also a pretty awesome place for baseball discussion. Since we're all a part of different blogs, I'd want to encourage everyone to bring the great posts and ideas from their own regular stops over so we could have as awesome a collection of information exchange as possible. And remember, if your FanShots aren't staying on the front page long enough, you can always go in to your settings and have it display more at a time.

In one of the more interesting baseball perspectives I've seen, Tom Tango tackles the value of "little people" as pinch hitters. I find it difficult to say anything with the constant fear of being un-PC, so I'll just chalk it up as interesting and thank Vivaelpujols for the link.

NoNameOnCard put together a terrific analysis of Nelson Cruz's seemingly total career turnaround using PITCHf/x and FanGraphs data. The story of dramatically improved plate discipline jives with anecdotal wisdom, but it's great to see an intelligent, analytical approach backing it up.

The discussion of Yankees Stadium's supposedly homer-friendly second life is probably a little bit of an overreaction to a small sample size, but WasWatching.com has about one of the more intelligent looks at how much this early season means, anyway. And then AccuWeather contributed their own look with this nifty picture: 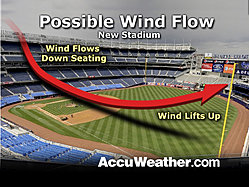 Harry gave us a look at the two sides of the Cubs Rule 5 coin with a PITCHf/x break down of Donald Veal and David Patton. Meanwhile, in other PITCHf/x small sample-size problem finding, Right Field Bleachers wondered what's wrong with Jeff Suppan and River Avenue Blues asked and answered the same question on Chien-Ming Wang.

And finally, a potentially controversial but no less intriguing rules change idea from Joe Po to regulate the use of intentional walks to defeat a team's best hitter.