Jordan Zimmermann's debut was delayed by rain, but not postponed.  The Nationals (or is it Natinals) rookie  had the pleasure of facing Derek Lowe and the Atlanta Braves on a rain soaked night in D.C.

Zimmermann made the team out of Spring Training, but was sent to AAA until his turn in the rotation came up.  The big kid from Wisconsin was a non-roster invitee to camp after being named their #1 prospect by Baseball America. He was also the Nationals' Minor League Pitcher of the Year in 2008 (stats).

The Washington Times chatted with Zimmermann during his break-out season and asked about his repertoire:

Q: Could you talk a bit about the different pitches you throw and how you like to use them?

A: I like to get ahead with my fastball. Late in the game I like to start guys out with the curveball and put them away with the slider. I'm developing a changeup right now; it needs a little work, but it's coming around.

Did you ever notice pitchers never tell us what pitch they like to fall behind on?

The change-up was on display against the Braves.  And it did indeed come around.

Impressions from the game (via MLB.tv)

Zimmermann had explosive stuff, worked quickly and appeared to be worthy of a job in the big leagues.  When he jammed Chipper Jones for a weak fly to end the first, I was impressed.  He consistently kept the ball up, though.

Eventually he made a mistake.  It came on an 0-2 fastball, up and catching too much of the plate.  Matt Diaz took it out to left, driving in Jones who had tripled to lead-off the fourth inning.

After that, ZImmermann settled down and ended up with a Quality Start and the win.  His mom was there to see it all.

Here's what he threw, using my own pitch classifications.  Zimmermann averaged just 12 pitches per inning, impressively limiting the sample to 72 pitches. 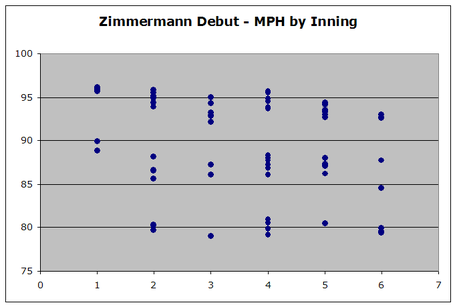 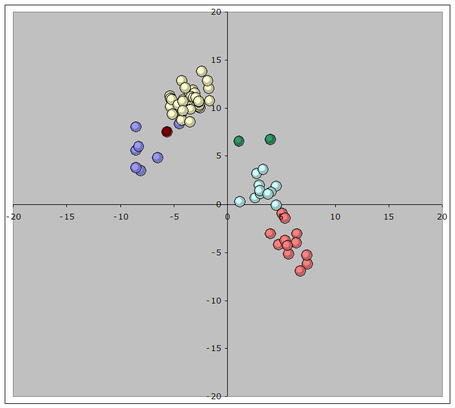 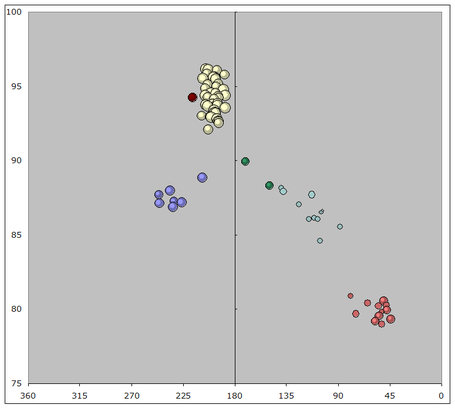 As I noted earlier, Zimmermann pounded the zone with the fastball while, in general, tending to keep the ball up.  Exhibits A and B:

The slider was a little up, too, but frequently away and out of the zone.  His curveball was working down and in to lefties.

All in all, a very good start to a major league career.