Graph of the Day: The Rays OF

Share All sharing options for: Graph of the Day: The Rays OF

Continuing our look at the defensive prowess of outfielders, today we focus on the 2009 Rays.

As always, data is based on David Pinto's PMR and Defensive Charts. 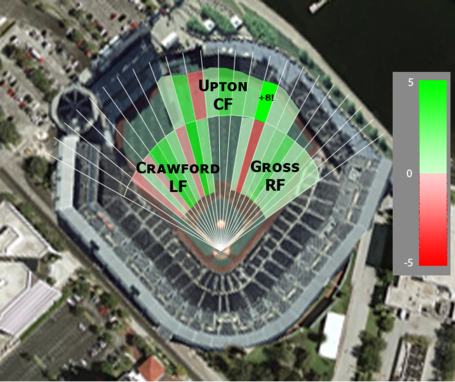 I know this isn't Tropicana Field, but being a dome, it's very hard to get a good overhead shot.  Anyway, let's talk about the defense.

B.J. Upton was just phenomenal last season.  He had one zone where he was +8 plays.  Part of that was Upton taking some discretionary plays (which is most likely why Gabe Gross is a negative in the same zone).

Both Crawford and Gross were outstanding in the corners as well.

There were very few places in the outfield where the Rays weren't above average - often substantially above average, which no doubt helped to catapult them into the playoffs.