Share All sharing options for: Graph of the Day: Seattle's Revamped Outfield

To many analysts, the Mariners overhaul of their outfield was one of the biggest moves of the off-season.

The team replaced Raul Ibañez and a mishmash of Wladimir Balentien, Jeremy Reed, and Brad Wilkerson with Endy Chavez and Franklin Gutierrez, in the hopes of improving their ability to prevent runs.

As before, all data taken from David Pinto's tremendous Defensive Charts based on Probabalistic Model of Range ratings. 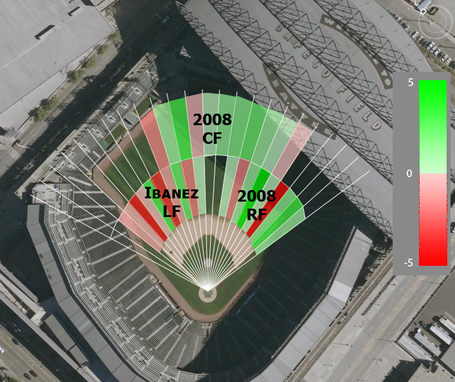 2008's graph included all players who played over 100 innings at the given position.

Basically, Ibañez was horrendous in left, and while the right fielders graded out at slightly above average, there was at least one major hole where they were over 5 outs worse than average (largely the result of Ichiro and Balentien).

How does the new outfield alignment stack up? 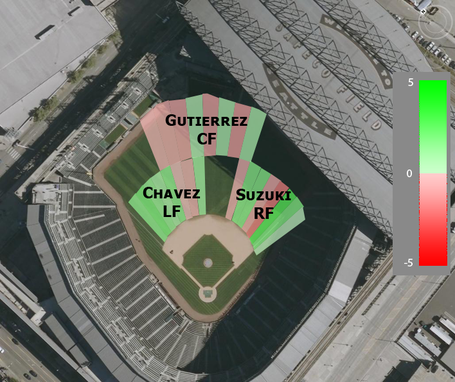 Keep in mind that the sample size for Gutierrez is fairly small in center field because of Grady Sizemore. The projections and the scouting reports suggest he will be far better than this.

Still, simply replacing Ibañez with Chavez should result in at least one win, and potentially as many as three wins, defensively.  Pushing out Balentien, Reed and Wilkerson is just gravy.

It will be interesting to see if the fielders can meet the extremely high expectations - and how much of a difference it makes to the Mariners' record.