I'm a smart guy.  I have a bachelors degree, can dominate Excel, and destroy my family in puzzle games on a regular basis.  But when Pitch f/x analysis first came out, I didn't get it.  From talking to friends and reading comments by readers, I'm apparently not the only one. 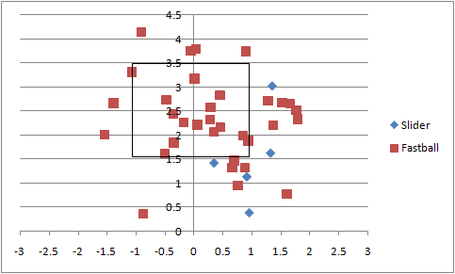 Looking at Ryan Perry's last outing, each dot, whether it's a square or diamond, marks where the ball is located as it crosses the front of home plate, and we're looking from the catcher's point of view.  (Maybe it would be nice if these pitch f/x gurus would watermark an image of a pitcher throwing right at us?)  The x-axis represents horizontal location and the y-axis represents vertical location, just as you probably assumed.  The units presented here are feet, although inches are often used.

This graph doesn't care about how a pitch ended up at each location, just that it did -- if a Randy Johnson fastball and a Barry Zito curve cross the plate at the same spot, they get marked with the same location.  Different analysts will show different strike zones but a common approach is to show a 24-inch wide zone, which best matches what is actually being called.

So that's the "what", but how about the "why"?  I mean, if these graphs are being used for analysis purposes, what might we gain from a location graph?  Well, you can see where a pitcher prefers to work.  Even more helpful might be location broken down by batter handedness (for Tom Glavine you'd see everything's outside) and/or by pitch type (sliders away and cutters inside).  You could look at location across starts to see if a pitcher changed their approach or to explain why they got rocked one day and not the other.  Or maybe only look at locations of pitches hit for homeruns. 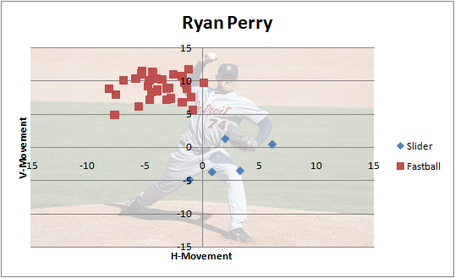 In a movement graph, we don't care about where a pitch actually ended up, but instead care about how it got there.  Our point of view is again from the catcher's eyes and the axes are again horizontal and vertical, but this time they represent change in location due to spin, not absolute location.  Change in location compares a pitch's actual final location at the front of the plate to where physics equations would have expected it to end up given no spin at all (and no knuckling effects).

For example, most pitches, with curveballs being the main exception, have some backspin, which causes them not to drop as much as a spinless pitch.  Anything above the middle of the graph has some backspin.  Curveballs have topspin, causing them to drop more than a spinless pitch, and they'll be below the middle of the graph.  Most fastballs have some sidespin in addition to backspin, which causes them to break horizontally -- righties' fastballs tail into right-handed hitters, so those pitches would appear on the left side of the graph.  Sliders have some sidespin, too, but in the opposite direction as fastballs and would usually appear on the right of the graph if thrown by righties, because they move towards a left-handed batter.

What movement graphs do not take into account is pitch speed.  Imagine two pitches without any spin, one thrown 50 mph and one thrown 100 mph.  Which one will drop more?  The first one, obviously, but all of that drop is caused by gravity, and none by spin.  Both pitches would register in the exact middle of a movement graph, because they end up exactly where you'd expect -- there's no spin to change their trajectory.  I'm not saying we don't care about speed or movement caused by speed (we do), I'm just saying that it's not a consideration on these graphs.

Ok, so how are these movement graphs useful for analysis?  Well, you'll find a lot of clustering of data points, which shows how each pitch tends to move for a pitcher.  You can compare the movement on one pitcher's slider to another's.  You could also compare the movement on a fastball to movement on a slider across a lot of pitchers, looking for ideal differences.  You could try to identify how sinkers compare to cutters compare to rising fastballs.  You could look at how consistent a pitcher is with movement (hanging curves), although perhaps consistency isn't what a pitcher is going for, like with Mariano Rivera's cutter.

Does that help?  Anything I can clear up?  Is there a different type of common pitch f/x graph that you think could use some explanation?