For each pitcher, which pitch has more movement?

Let's start with a side view 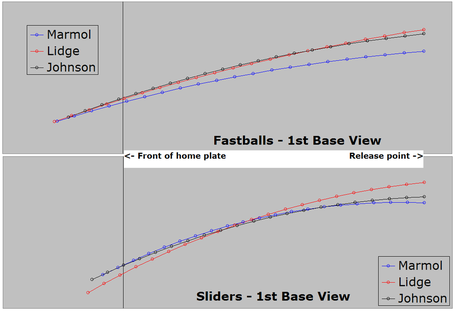 Marmol and Johnson sling the ball, Lidge comes over the top.  Unit's obviously taller than Marmol, so he's dropping his arm even lower than the Cubs set-up man.

The fastballs all look straighter, vertically, than the sliders.  Remember though, gravity is pulling the ball downwards from the moment it leaves the pitcher's hand. Because they're thrown with back spin, fastballs can defeat gravity by six inches to a foot or more, while sliders often just follow the path gravity takes them on. In reality, the fastballs have less downward break than the sliders, which spin around a vertical axis.

The fastballs we're looking at here are four-seam fastballs, although Marmol's sample may actually be a mix of four- and two-seam. Lidge and Johnson do rely on the four-seamer, and the pitch we all call Johnson's "change-up" is nothing more than a two-seam fastball - or sinker -  with something taken off.

A quick note on two-seam fastballs - Derek Lowe's "sinker" beats gravity by just an inch or two, so it seems to sink like mad.  I'll have more on sinkers/two-seam fastballs and their four-seam cousin another time.  How they behave (sink vs. tail vs. rise) has to do with grip and arm angle ... but I digress ....

Lidge and Johnson both have enough back-spin on their sliders, on average, to make them beat gravity by a couple of inches.  The sliders, in actual play, seem to drop or sink.  Why? Because the fastballs seem to be straight or rising - it's all relative.

We see the ball "drop" because we're expecting, without realizing it, the ball to have a lot of backspin.  When a pitcher takes that spin off, gravity does its thing and the ball seems to drop.  A curveball, with it's top/over spin does actually sink, but that's also for another day.

That's just one perspective - vertical break.  When people talk about "break" it is usually about the sweep of a slider or the amount of tail on a fastball.   A Bird's Eye view will isolate those movements. 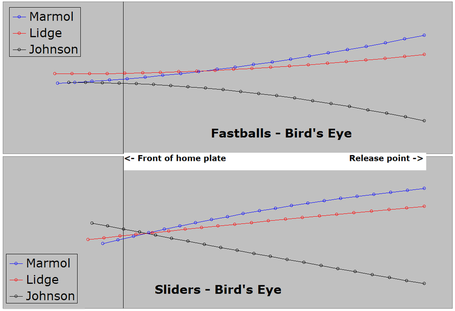 Randy Johnson's famous slider is just about straight as an arrow when viewed from above - no sweeping break.  His fastball tails, in the opposite direction of what little break there is on the slider.  I think most baseball fans are familiar with tailing fastballs, but have, collectively, underestimated just how much tail there is, even on the straighter fastballs, such as Brad Lidge's.

Lidge's slider is pretty straight, too, and his fastball, as a result of being thrown more over-the-top, ends up without much lateral movement.  Still, there is more tail on the fastball than sweep on the slider.  And that's with a four-seam grip and an overhand delivery.

Carlos Marmol, on the other hand, with his slurvey slider, which we now know actually does have greater-than-gravity sink on it, also gets some real break or sweep.   Johnson's slider gets virtually no lateral spin movement, hence the straight line, and Lidge gets about a half an inch. Marmol, on the other hand, spins the ball such that it acquires over 5 inches of movement from the spin.

Anyone can see how nasty Marmol's pitch is, and everyone knows how great Johnson and Lidge's sliders are, but Randy and Brad get more tail on their fastballs than sweep on their sliders.  A pitcher needs to go more towards the slurve/curve spectrum to beat the spin movement on their fastballs and make that pitch truly break.

How We See It

Even with a half-foot of sweep on his slider, Marmol's breaking pitch is no match for his fastball, which tails almost an inch more, and in the opposite direction.  Relatively speaking, that's over a foot difference in break. That relative difference is probably where we get the magnitude of break from - "that slider broke six inches!".  No, it was straight, but the fastball, that broke six inches.  For whatever reason, we perceive fastballs as straight, and any other type pitch seems to be break, when, in reality, there may be an absence of break.

So, even Marmol's fastball gets more spin movement than his slurve - but why don't we "see" this as fans, with all those TV angles and replays?  Why do fastballs look straight, even though they defy gravity and "break" laterally so much more than sliders, which are in reality, straighter?  I'm saying that's what happens, and the opposite is what we see.  I ask you, the reader, why?

Here's a table that shows you the raw spin movement numbers reflected in the flight paths above.

Spin Movement
(inches; movement relative to the path taken by a pitch with no spin; negative values indicate movement to the catcher's left or, for vertical movement, drop beyond that predicted by gravity alone)