Continuing our division by division series of Farm System Values, the NL East is now up to bat. As a refresher, here again are Victor Wang's surplus values for the different classes of prospects:

...and here is the graph illustrating the total surplus values for each farm system in the division: 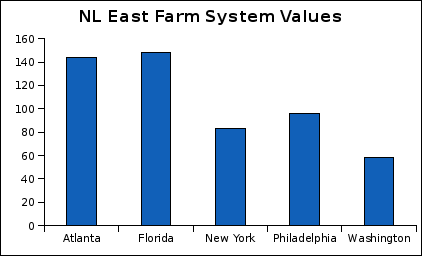 Note: B and C grade prospects are taken from John Sickels' Top 20's published at his blog. Occasionally John changes a grade between the time he publishes his top 20's and his annual book. It is also likely that some C grade prospects at lower levels were left off the Top 20's. In my mind, neither issue should have that large of an affect.

Random comments on each system: 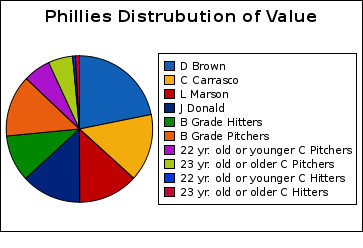 Total Surplus Value: $95.59. This is a pretty healthy system. Dominic Brown is still mostly projection, but has star talent. There are high ceiling players in the system who could take a big step forward this upcoming season, but for now the lion share of the Phillies' value lies with players that may not necessarily have superstar potential but project to be solid regulars. 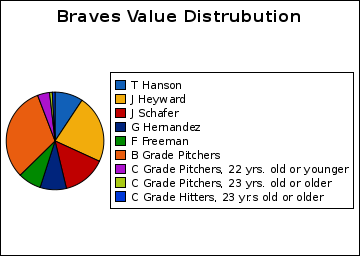 Total Surplus Value: $144.35M. I've already wrote at length about the impressive depth of outfield talent the Braves have, but check out that pitching depth - $45.5M worth of B grade pitchers, and then they also have Tommy Hanson, the 2nd ranked pitching prospect in the game, as the icing on the cake. The Braves could have rated even higher, but used some their impressive minor league depth to land Javier Vazquez this winter. 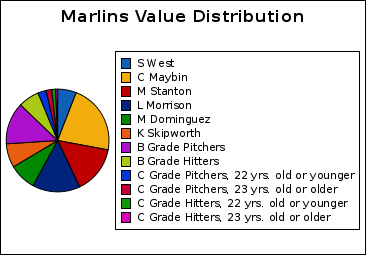 Total Surplus Value: $147.96M. The Marlins hitting depth is astounding, with five top 100 position players worth a surplus value of $100.8M. With this impressive farm system, the Marlins should field a solid team for years to come; too bad no one will care. I can't say I blame Florida fans - why get attached to future stars like Cameron Maybin or Mike Stanton when they eventually will be moved to organizations that actually give a flip?

Summing up, the Braves and Marlins are loaded with ridiculous talent. Atlanta will utilize it for the good of their fans, Loria will use it to line his pockets. The Mets have some impressive high-ceiling Latin players who could either boom or bust and are  a few years away. The Phillies should be good for a while and the Nationals should suck for a long time. Dropping Bowden and adding Strasburg are moves in the right direction but rebuilding could take a while.

Next up: The AL Central.