Over the past few months, Harry Pavlidis has been slicing and dicing the strike zone in order to explore how pitchers locate the ball in different situations.  I'd like to add another dimension to the exploration - leverage index.

For those who aren't familiar with the concept, leverage index provides a numerical value of how critical a given situation is.  Created by Tangotiger, leverage index technically measures the "swing in possible change in win probability" but essentially represents how important an at-bat could be in determining the winner of the game. A key point is that leverage index represents the importance of the event at the time it occurred, not looking backwards after the game is complete.

How does this all apply to Harry's slices?

My first foray into the effects of leverage on pitching covers Mariano Rivera.  I chose Rivera for two major reasons.

First, he only throws one pitch, the cutter, which allowed me to ignore the possibility that pitchers mix up their pitch selection based on the situation (I'll explore that more in future articles).

Second, as a closer, he pitches in a fairly good mix of situations; although they do tend to be higher leverage than the average pitcher.

Here's the breakdown of the leverage situation for Rivera's pitches in 20081.

In general, it does appear that Rivera tends to get a little bit more of the plate in low leverage situations than in others.

It was somewhat suprising to see the percentage of fat pitches in high leverage situations.  I can think of a few reasons why that might be the case.  In many high leverage situations, a walk might be just as poor an outcome as a hit, so the pitcher wants to avoid being too fine with his pitches.  Another possibility, is that Rivera is confident in his ability to generate poor contact (based on the movement of the cutter) that he's willing to pitch to the center of the plate.

While one pitcher does not a pattern make, it seems this style of analysis might be a fruitful one.  We know pitchers pitch differently in different circumstances and this might be a window into how.

I'd like to look at how pitchers behave in aggregate as well, but that approach is fraught with concerns about selection bias - in that weaker pitchers (those who might have more difficulty keeping the ball in the strike zone) understandably tend to have an inordinate share of low leverage appearances.  So this analysis may have to wait until some corrections are made.

I plan on applying the same approach to some other pitchers, but I'd love to hear feedback on what I can do to improve the analysis or the charts.

As a final treat, I'll leave you with a scatter plot of all Rivera's pitches by leverage index in 2008.  Red is high leverage, blue is medium, and grey is low. 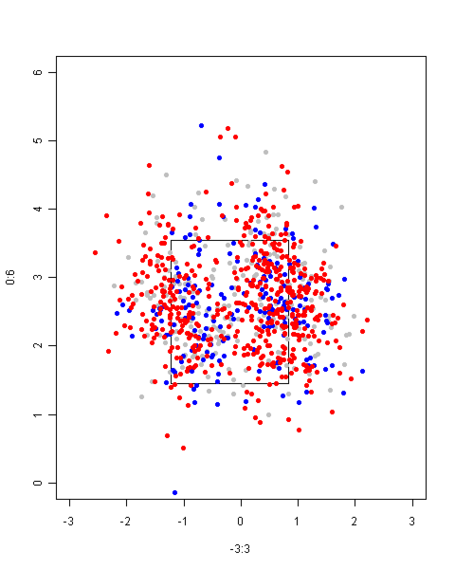 1. The Win Expectancy and Leverage Index data is licenced from http://www.InsideTheBook.com

2. Technical note:  I'm using Harry's original slices, found here.  I know he's changed the size of the slices since then, but I haven't updated my queries.