The World Baseball Classic has already been fun.  This year, an added bonus is having PITCHf/x data available for all games in major league parks.  This is special because it is a rare chance to get a look at some prospects who may not see PITCHf/x park for a few years - if at all.

Saturday afternoon featured a match-up of Canada and United States.  The Canadians had far less experience at the major league level - particularly within the pitching staff.  They used five pitchers in the process of losing the game:

Before diving into Aumont, the 11th pick of the 2007 draft, here's a quick look at all five pitchers' stuff.

cfx is my pitch id, pfx_x and pfx_z are movement caused by spin, in inches.  The last two columns are the spin angle are spin rate.  CH is a change, CU a curve, FA a fastball, F2 and F4 are two- and four-seam fastballs, SL is slider, FC is cutter, and FS is splitter.

Begg and Johnson are free agents - Johnson is hanging up the spikes after the tournament.  Davidson has seen a couple innings with the Pirates, and Leroux is in the Marlins' system.

Phillippe Aumont is a hot prospect - MLB has him listed 33rd in their ranking.  He's 6'7", just turned 20 and has just a season of work in the Midwest League as a profesional.  And he's got nasty stuff.

We're only talking about 21 pitches, but USA hitters swung at 11 pitches and missed 7 of them.  Aumont was zone-avoidant, though, with just 7 of his efforts finding the generous 24 inch wide plate. 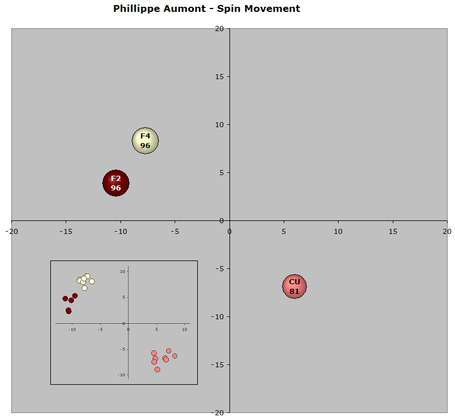 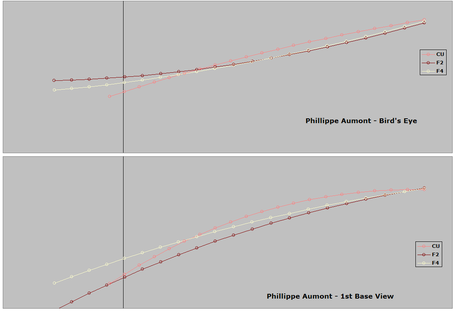 Those flight paths for the fastballs run out to 10 ft past the front of home plate, as the time scale is the same for the curveball, which takes a while to get to the plate, relative to the heaters.  Aumont kept the two-seamer down during Satuday's outing.  The Bird's Eye view is the most impressive - the overlap of the fastballs seems to indicate a consistent release and arm angle.