On Monday we looked Victor Wang's fantastic research on the "hidden value of prospects", and applied his surplus values to the farm systems of the AL West. Here again are the surplus values for your review before we jump into the NL Central.*

*I decreased the values thanks to an astute reader's observation. Last time they were $4.8M/WSAB -- what we would have expected if the FA market continued to grow by 10% -- but that's too high considering the chilly off-season market. Victor's research was published 14 months ago, times have changed. It's now set at $4.5M/WSAB, which is higher than current spending, but is on par with last year's free agent market. 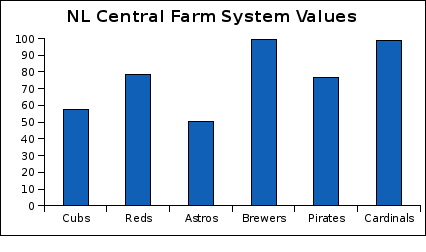 We'll start with the bad first.

Rather than a lot more explanation, here's a couple of graphs illustrating distribution of for these two systems: 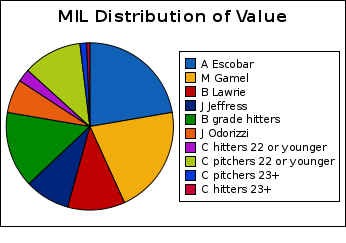 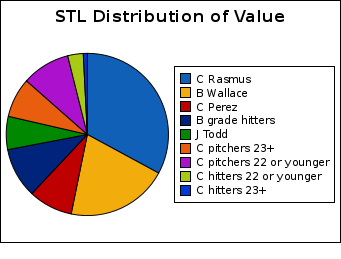 The Brewers a strong depth of hitting prospects; the Cardinals have a 1-2 punch of Colby Rasmus and Brett Wallace at the top. Both players should be permanently entrenched the Cardinal lineup by 2010, if not sooner.

Concluding, the Cubs had better win now while they are in "win now" mode. While they look to be in position to do so for the next few years, the Reds, Brewers and Cardinals are all pumping impressive talent up the pipeline, and the Pirates can't help but to slowly but surely improve under Neal Huntington's watch. As for Houston, well...things could be ugly for a while.