Share All sharing options for: The Sheff Stops Cooking 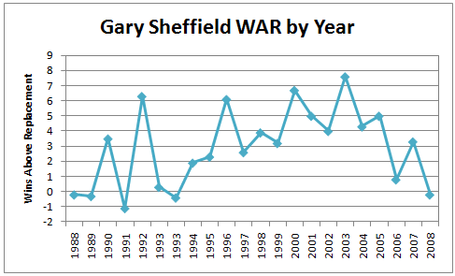 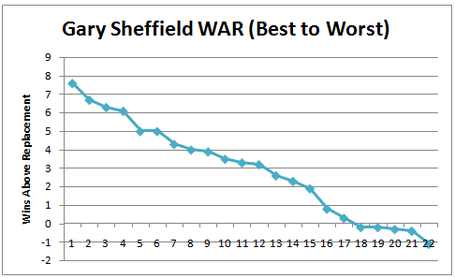 Because Sheffield often battled injuries in his career, the low-end of his WAR graph is partly because of injuries. For example, in his final season with the Brewers in 1991 Sheffield only played in 50 games. For most of the season he was having thumb and shoulder problems which obviously killed his performance -- in just the previous year he a +3 win player.

Now that the Tigers have released Sheffield -- and in the process they are eating his $14M salary for '09 -- any team can sign him to the league minimum. Does Sheff have anything left in the tank?

Let's do a quick WAR projection for the upcoming season with CHONE.

You'll notice that it doesn't really matter if Sheffield is DH'ing or playing the OF. He's getting the same overall adjustment of -17.5 runs either way. Though, whether he can stay healthier at DH might be a topic for debate. When everything is totaled up, Sheffield probably breaks into '09 as a half-win to a full-win player. Moving forward, Sheffield looks like a league average hitter (slightly better) that should probably be kept out of the field as much as possible. Having a league average hitter for your DH is nice, but you should really be able to do better.

Because Sheffield is essentially free, I wouldn't be surprised to see a team pick him up to see if he's got anything left in his bat while he collects his last remaining couple of home runs. Just don't expect for vintage Sheffield to show up, because it's not going to happen.