Graph of the Day: The Yankees Outfield

Share All sharing options for: Graph of the Day: The Yankees Outfield 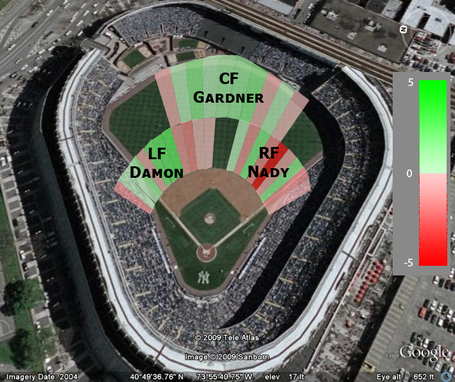 Trying something new here on GotD.

In the past week the Yankees have announced their starting outfield for 2009 - choosing Brett Gardner and Xavier Nady over Melky Cabrera and Nick Swish respectively.

Here's how the current starters stacked up defensively in 2008 by vector.

All vectors extend from the infield to the wall (more or less).  I've shortened them for display purposes - so we can see the zones that are covered by more than one fielder.

Damon was amazing on balls hit in the normal LF positions (+7 outs) which suggests he's good at going forward and back on the ball, but doesn't necessarily have great lateral movement.

Nady, on the other hand, was -4 outs on balls hit to the normal RF position.  I know it's beating a dead horse, but I'm still not sure why Nady is starting instead of Swisher.  Sigh.

Data from David Pinto's Defensive Charts based on his Probabilistic Model of Range (PMR).  You should definitely check them out.