Graph of the Day: Ozzie vs. Andruw Historical WAR

Share All sharing options for: Graph of the Day: Ozzie vs. Andruw Historical WAR 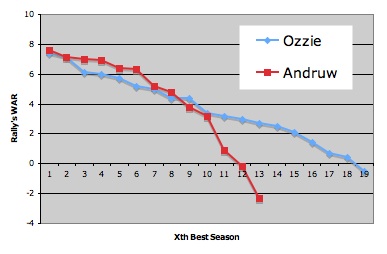 Motivated by recent FanShot discussions, here are Ozzie's and Andruw's seasonal WAR totals sorted from best to worst, thanks to Rally's new WAR database that goes back to 1955 (the retrosheet era).

Andruw has the better five-year and ten-year peaks, and both guys had nine seasons at what I call All-Star level (4 WAR).  At their 11th best seasons, Andruw fell off a cliff while Ozzie held on for four more above league-average.

To me, any season below 2 WAR is meaningless, and seasons in the 2-4 WAR range are barely worth noting.  Over their peaks, Andruw was Ozzie's equivalent in the field -- at a slightly easier position -- but with a much better bat.