Graph of the Day: Boggs vs. Gwynn vs. Ripken

Share All sharing options for: Graph of the Day: Boggs vs. Gwynn vs. Ripken 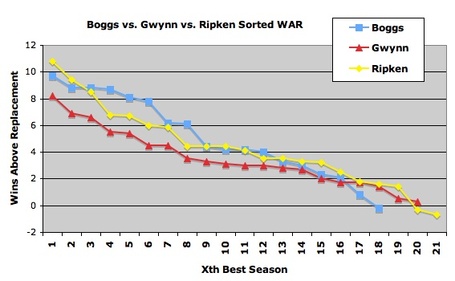 Today's GotD is also a link to four more graphs, as part of my article that appeared on The Hardball Times yesterday.  I took a look at the careers of Wade Boggs, Tony Gwynn, and Cal Ripken, Jr. using Sean's WAR database.

The short story is that Boggs and Gwynn were equally awesome hitters, while Ripken was merely good.  On defense, however, Gwynn loses a ton of value, both because he played a much easier position and because TotalZone calls him an average fielder for his career.  Ripken was really good, obviously, and Boggs put up extremely consistent fielding seasons in the +5 run range, even during his Boston years.

Overall, well, you can see above how they stack up.  While Ripken's one 11 WAR season is epic, I think I'd give the career nod to Boggs, while Gwynn definitely earns the bronze medal.  And that's not what I would have guessed beforehand.