Share All sharing options for: Graph of the Day: Robin Yount's Position Switch 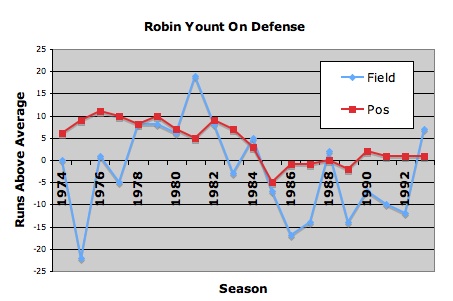 Robin Yount started as a shortstop with the Brewers, then was moved to the outfield in 1984, I assume because people felt he struggled there, but maybe others can add more detail.  He then played center field almost exclusively, although some left field was included in 1985 (the lowest point on the red line) and he DH'd a few games each year.  The position adjustment for CF jumps a bit in 1990, because center field has become more valuable over the decades.

TotalZone absolutely hates the position switch.  From 1974 through 1984, Yount rates at +10 runs overall on defense per season, while he comes in at -8 runs per year after the move to center field.  I realize players lose their fielding ability as they age, but it's a striking, immediate decrease in defensive value.