Wrapping up the series, this time it's the NL West's turn. It ain't pretty. 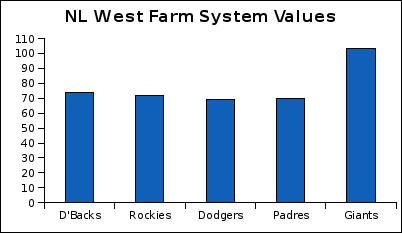 Once again, the prospect surplus values as figured for Victor Wang. You can read more on Victor's findings here:

For further explanation, here's the first post of this series. Or click on this link for a listing of them all.

From this study I found that $90.1M is the average farm system value. Therefore, with the exception of the Giants, these systems are pretty bad. It is as if it's not enough major league teams in the division were not mediocre enough to begin with. 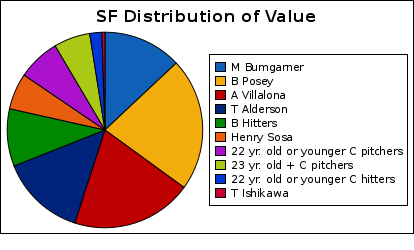 Giants, $103.5M. The Giants have been a bit of a joke lately, but they seem to be turning things around faster than expected. The Giants have a poor reputation for developing position players, but that is changing. Posey may be the best catching prospect not named Matt Wieters. Villalona has as much power potential as any hitting prospect in the game, and Conor Gillaspie was the first player from last year's draft to make the big leagues. Madison Bumgarner looks to be the next great young Giant pitcher, and Tim Alderson may not be far behind. The Giants are not only improving through the draft, but also spending big dollars on top Latin American talent.

While the Rockies, Dodgers and D'Backs have cranked out some impressive talent,  no team has really been able really separate themselves in this weak division. The Giants may be that team. A rotation headed by Lincecum - Cain - Bumgarner - Alderson will keep runs off the board, but they still are a little shy on hitting talent before I can foresee a complete turnaround. Posey and Villalona will definitely help if they live up to their potential.

Up next: All 30 teams ranked by surplus values.