One of my favorite aspects of baseball is watching new talent emerge -- specifically  pitching talent. It's always a thrill to see up-and-coming arms perform well at the major league level, regardless of team. If you made a list of young arms that began to establish themselves in 2008, Rockies RHP Ubaldo Jimenez would be near the top of that list. Last season Ubaldo Jimenez made 34 starts and put up the following line: 198.2 IP, 182 H, 106 BB, 172 SO, and a 3.83 FIP.

When people think about Denver baseball, they often think first of high-powered offenses. For years the team calling card has been -- and still is to an extent -- offense. Players like Dante Bichette, Andrés Galarraga, Larry Walker, and Vinny Castilla made their respective careers by bashing long home run after long home run in the thin air of Denver. You'll still see the occasional 14-12 game at Coors Field, but some legitimate pitching talent is starting to develop in the Centennial State.

Which brings us back to Ubaldo Jimenez. In today's post we'll be examining Ubaldo's '08 season with the help of PITCHf/x data. What's he throw? How hard does he throw it? How much does it move? Let's get started. 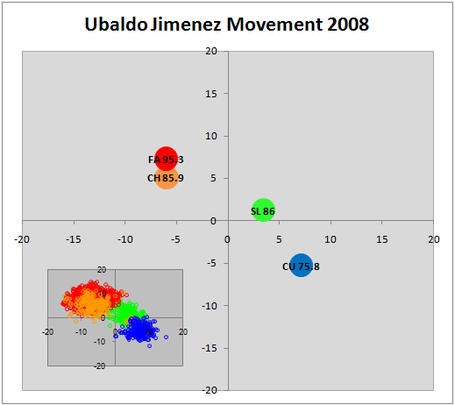 If you could use one word to describe Ubaldo Jimenez it would be velocity. The average velocity on his fastball last season was 95.3 mph. For a starter, that's above-average velocity. The average FB velo in the NL last season was between 90-91mph. Not only is Jimenez's fastball overpowering, it's moving quite a bit. On average it's moving 6 inches in on a right-handed batter. Of all the pitches Jimenez threw last season, he went to the fastball he most -- throwing it 70.66% of the time. When you're throwing in the mid-90's consistently and with movement, why throw much else? Jimenez's GB% of 54.4% last season is a testament to the velocity and movement of his fastball. More often that not, batters pounded the heater into the ground. Jimenez created 234 outs on the ground last season and of those 234 groundouts, 185 of them came on his fastball. 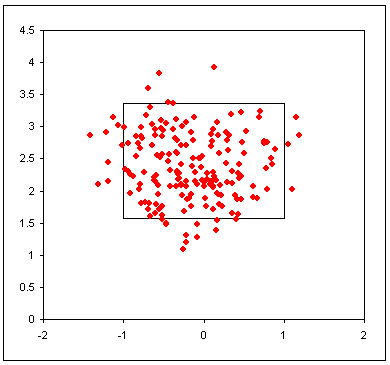 Because of his above-average velocity -- and solid movement with the 2-seam fastball --  it appears that Jimenez can pitch anywhere in the zone and still get groundballs. Imagine how hard it is to square up a 95+ mph fastball with movement boring in on righties.

Jimenez is also throwing a changeup (85.9mph), curveball (75.8mph), and slider (86mph) in addition to his fastball. From his secondary pitches, he's most most likely to use the slider (13.13%) when he wasn't throwing his fastball. The slider and curveball will give right-handed batters something to think about as they'll break down away. Left-handed batters were more likely to get the changeup -- 70.6% of Ubaldo's changeups went to LHB -- because of the movement of the pitch. Lefties tend to like breaking balls low and in. LHB's only saw Ubaldo's slider 37.3% of the time compared to RHB's. Surprisingly, Jimenez's curveball usage by batter handedness was 50/50. I would have expected a larger slant towards RHB's for the usage.

Still, the most impressive thing to me about Jimenez is his velocity. Not many starters can maintain the level of velocity like he does. I want to finish this post with a couple of fastball velocity plots. The first is a velocity plot by start. To remove any stadium bias, I'm only looking at his starts in Coors. The 2nd plot is his average fastball velocity by inning. 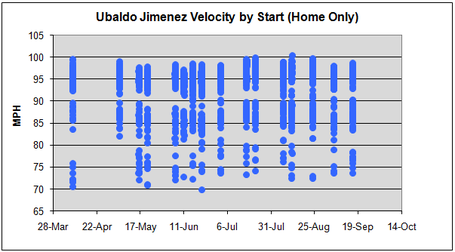 Jimenez's velocity was pretty consistent throughout the '08 season. Despite throwing a career high for innings, he didn't appear to tire out much. He also touched 100mph a few times. You can see his different pitch-types from the velocity groupings. The fastball will be in the low-90's and up. The slider and changeup are in the mid-80's and the curveball dips down into the 70's. 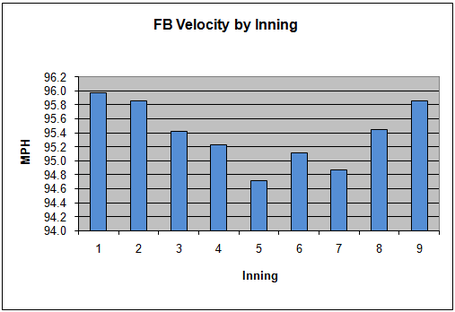 This plot demonstrates the average velocity on Jimenez's fastball by inning pitched. I'll note that because most starting pitchers don't get to 9th inning that much, the sample is pretty small. I only tracked 14 fastballs that were thrown by Jimenez in the 9th inning. So, keep that in mind. I'm not trying to state that he's going to be throwing as hard in the 9th as he is in the 1st.

Still, overall, you can see that through most stages of the game Jimenez is bringing awesome velocity on his fastball. The lowest FB velocity by inning that Jimenez dipped to was 94.71mph in the 5th inning. Coming out of the gate, Jimenez is firing his fastball just a hair under 96mph in the 1st inning.

Jimenez's profile of raw stuff combined with movement and velocity make him a tough opponent to hit off of. His control needs work -- a 4.67 BB/9 in '08 -- but the amount of groundballs he's inducing comibned with the ability to strike hitters out helps to balances things a little. Ubaldo will only be 25-years-old this coming season and if his control does take step forward while he maintains his raw stuff, he's a very good candidate for a breakout season -- even while pitching in Coors. Maybe sometime in the very near future, Rockies fans will head to Coors to watch the pitching instead of the hitting.