Share All sharing options for: Shawn Estes and the Dodgers' LOOGY Experiment

Shawn Estes accepted an assignment to the Dodger's minor league camp, where he will attempt a conversion

"I'm going over there to pitch out of the bullpen," said Estes. "I'll pitch [on Tuesday], probably pitch on back-to-back days, then come back to the Major League club for the last week. I kind of like it; I'm kind of excited. It could be a new phase of my career."

Estes got his work today, and Rotoinfo had this note:

Shawn Estes, on a crash course to become a situational left-hander, relieved Schmidt and allowed two unearned runs on one hit in one inning.

Hmm, not a lot to go on.  I'll speculate instead.  Using PITCHf/x, of course.

Estes seems like an unlikely reliever.  A junkball lefty, Estes is mostly a sinker "and the  rest" pitcher.  His cutter did make a comeback in 2008, during his second stint with the Padres.

These three graphs break down Estes' pitch selection by start - the last two are split by LHH/RHH. 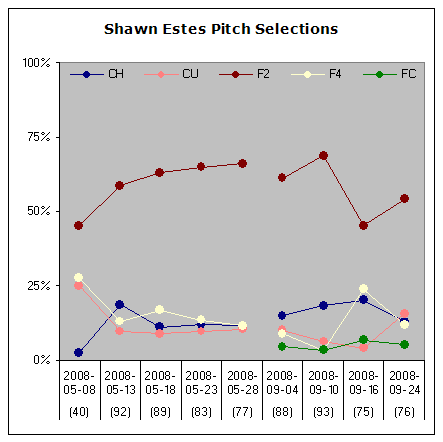 I broke the lines so you can easily see the May vs. September games.  The #'s in parantheses are the total # of pitches for that date.  In the next two charts, that number, and the rates, are isolated by batter hand. 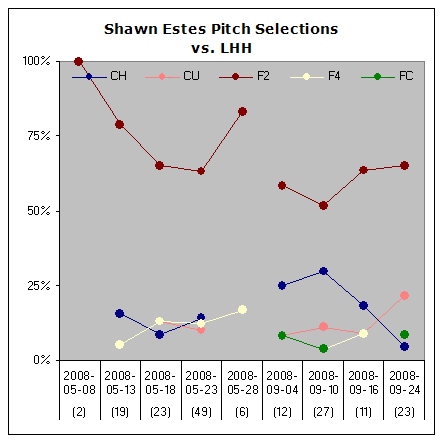 The LHH pitch counts range from 2 to 49, so these percentages are dicey. 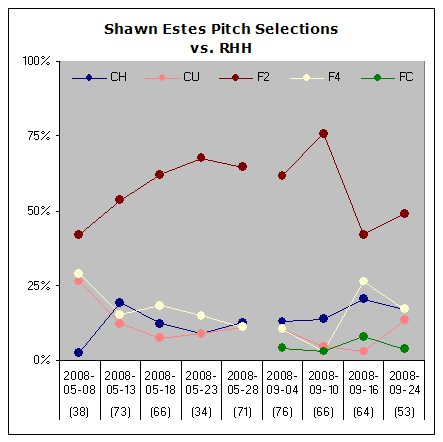 The cutter, rarely used, was oddly effective - it seemed to fool hitters quite a bit.  More on that in a bit.

Estes labored in 2008, falling behind hitters on over half their plate appearances (54%).  Not exactly a great characteristic for a relief pitcher.  The problem was there for all of his pitches - except the cutter.  Of which there were just 16, and only 4 thrown on a 0-0 count. 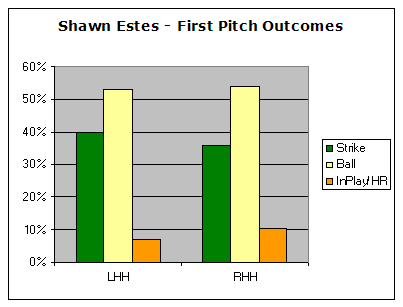 OK, so Estes fails one test, IMO - he falls behind too many hitters, both right- and left-handed (although the distribution across pitches is different).  Fine, but does he have an out pitch? His 50% GB rate isn't enough to get me excited - he needs to miss some bats, especially since he tends to fall behind.

Starting with righties, here are swing and whiff rates for Estes in 2008, by pitch type: 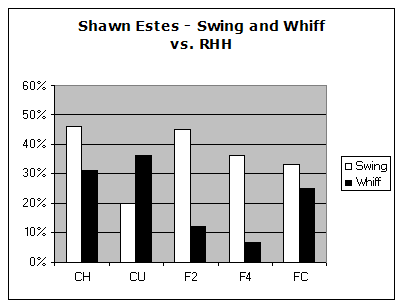 The curveball gets observed a lot, but sports the best whiff rate.  Estes' change also does well.  Neither are spectacular, but both are solid. 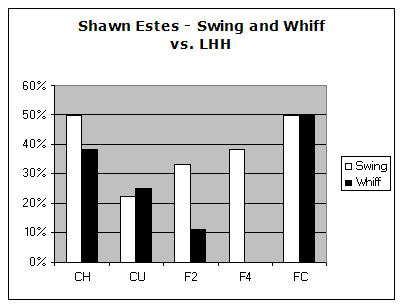 That lefty-vs-lefty change-up is effective. I'll give him that.

Here's what Estes will go to on two-strike counts:

Why no 0-2 curves to righties?  Seems to break a pattern.  I should also note, there don't appear to be any actual 3rd strike change-ups to lefties by Estes in 2008, just to righties.  Is that really an out pitch?

So, Estes as a LOOGY.  I'm not so sure.  He's not someone you want to bring in with the bases jacked, that's for sure.  Maybe long relief, but a situational specialist sounds like a stretch.